Associate Professor Dan Waters writes that the Functional Grains Centre has hosted two students keen to tap into the research expertise at the Centre. 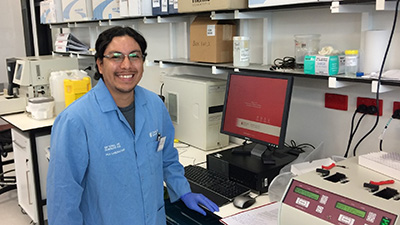 Erick’s PhD research is examining the inclusion of pea protein in oat crackers (biscuits) as a functional food. Following a scan of the worldwide literature on the topic, Erick concluded the FGC was the place to go to engage in some research which would put the metaphorical icing on the cake of his PhD. The icing in Erick’s case was to subject the pea protein concentrate he has been researching to in vitro digestion,  then use mass spectrometry to characterise the released peptides.

Erick’s background highlights how science offers great opportunities and experiences in working on a diverse range of interesting projects. Although Erick is undertaking his PhD in food chemistry/technology, he has an undergraduate degree in chemical engineering majoring in process engineering. Erick extended his undergraduate work to a Master of Science where he used his skills in software engineering to control the crystallisation of honey. He has also worked in a coffee processing factory looking after the processing, quality control and flavour profiles. This work inspired an interest in food chemistry and before long Erick found himself feeding crackers containing pea protein to mice to see how well they grew and how biochemical health markers responded to this diet.

Erick has completed data gathering parts of his research and has now moved the writing up phase. We wish Erick well for the submission and defence of his PhD which should take place in mid-2019.

The FGC also hosted University of New England (UNE) Bachelor of Agriculture student Erin Lukey for the month of November. Erin spent her early years in the Sydney suburb of Turramurra and it was during this time she developed an interest in agriculture, sparked by visits to her neighbour’s hobby farm near Orange.

Erin is interested in all elements of agriculture, from very practical on-farm activities to business principles, and the science which drives productivity and profitability. As part of the UNE Bachelor of Agriculture requirement to complete practical work, Erin has previously spent time on farms with stock and station agents engaging in the production and business side of agriculture.

Given her interest in the science behind agricultural production Erin found her time in the Charles Sturt University (CSU) labs working with FGC students Esther Callcott, Shiwangni Rao and Michelle Toutounji on their rice projects a rewarding experience.