Message to our students and staff

The sustainability sub-plan is a key document supporting CSU's corporate strategy. Listed within it are these biodiversity targets:

Biodiversity reports were commissioned for each major campus to help staff to identify areas of existing biodiversity value, as well where CSU can protect and enhance connectivity between these areas.

CSU Green aims to include the majority of the areas identified in these reports in our biodiversity targets, though occasionally natural or human-made factors prevent this. Two examples include: 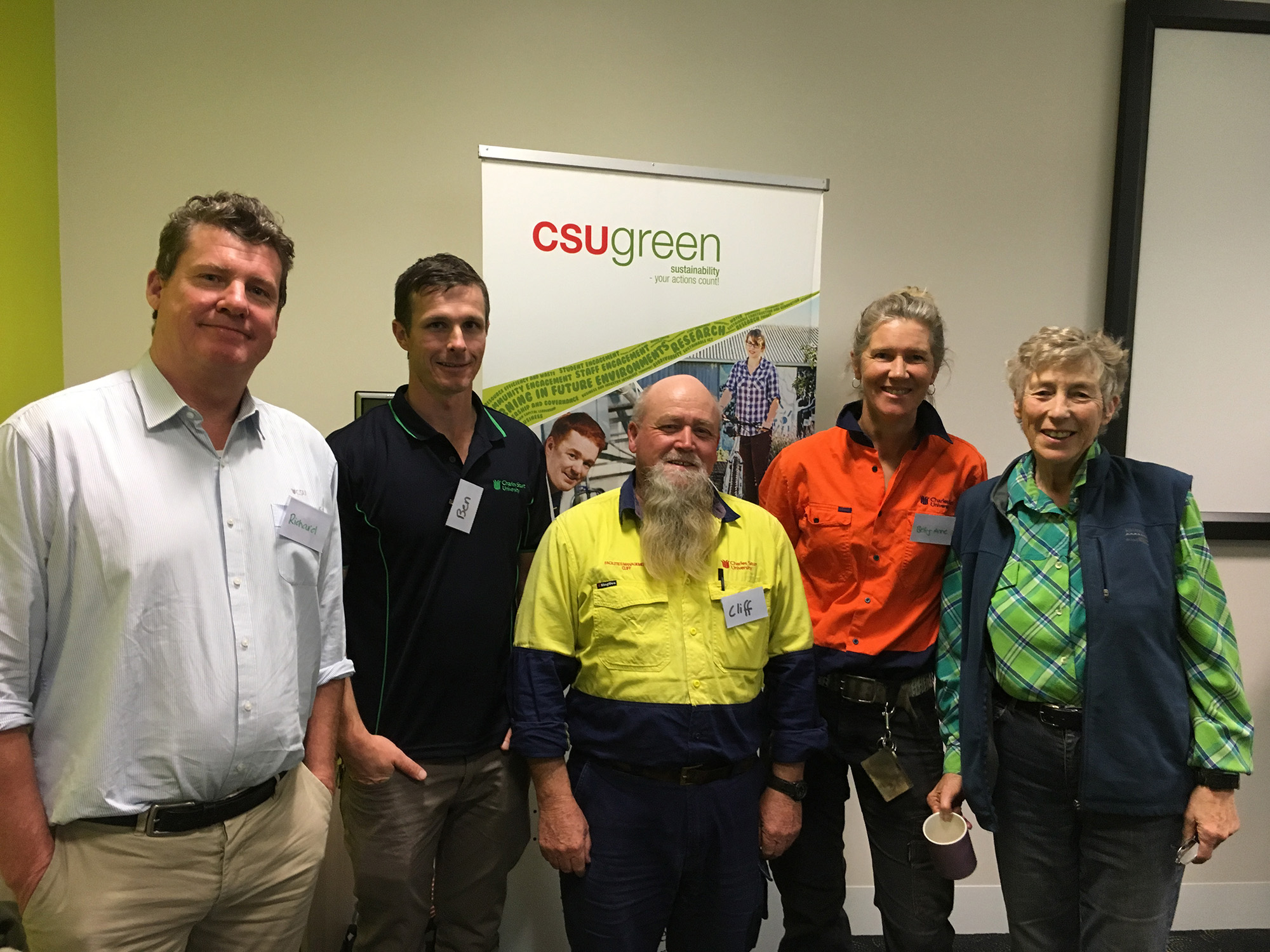 This framework was benchmarked on 27 August 2015 and revisited in August 2016 and 2018. This graph indicates our progress (indicated in green) toward best practice across the eight activity areas for this framework.

The below graph illustrates our progress towards best practice across the eight (8) activity areas.  The orange bars reaching four (4) highlight best practice and the lower bars in blue indicate CSU’s current baseline ratings set in July 2015.  Ratings were reassessed in August 2016 and 2018. CSU's biodiversity monitoring program got a boost with the appointment of Environmental Science & Land Management student Trevor Osborne at Albury-Wodonga. Pictured with DFM's Richard Overall with the map showing the location of the 13 potential photo-point sites 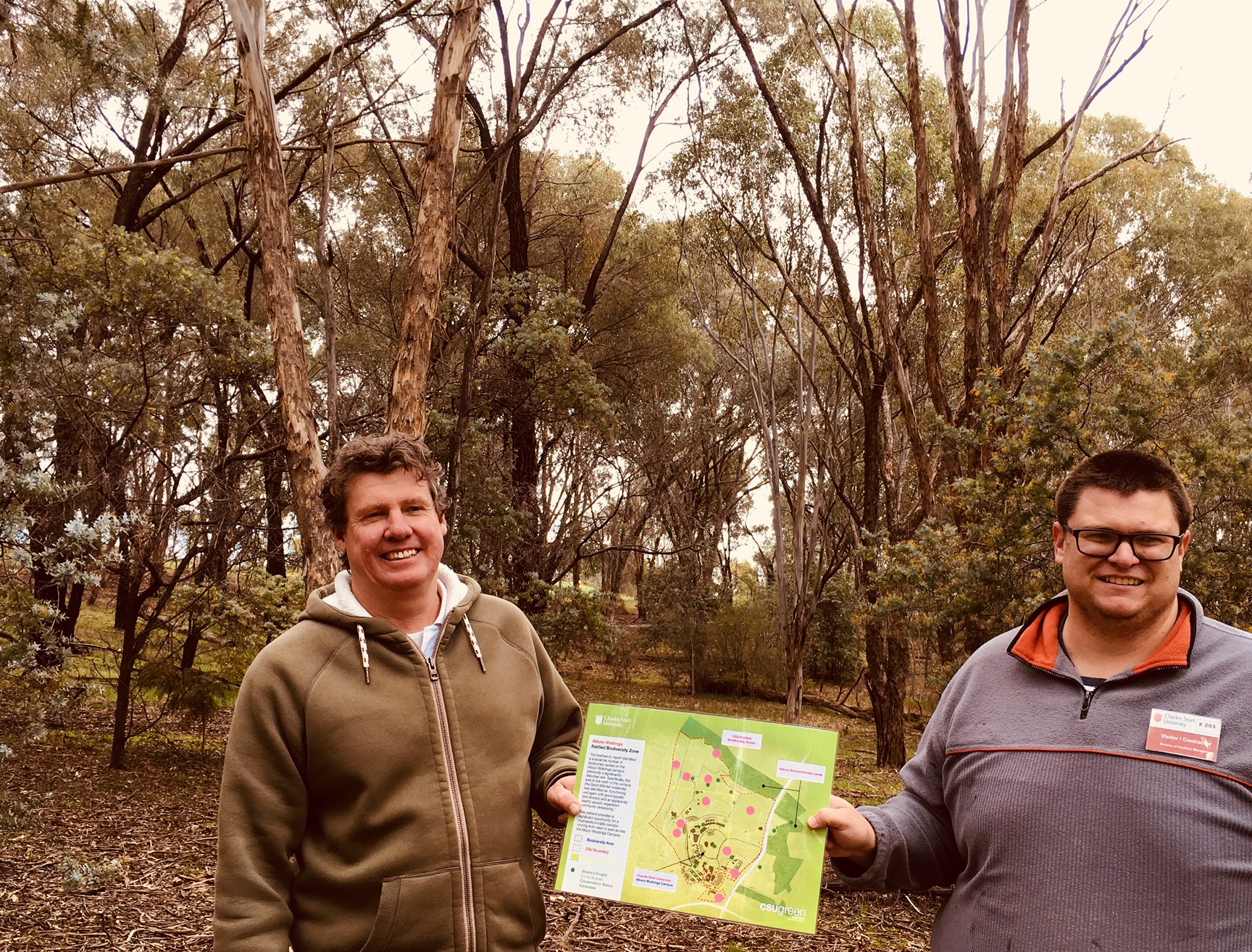 Achievements – stories of most significant change

“In my opinion, the most significant biodiversity change that has occurred at CSU Orange has been the wildlife corridors which have expanded habitat for wildlife, particularly bird and bats.

Several years ago, we received funding from the Central West Catchment Management Authority for two major wildlife corridors, one around the main dam and one in the eastern section of the farm.  The latter was not particularly successful, but the shelterbelt around the dam now has several hundred trees, shrubs and groundcovers which has improved connectivity to other treed areas and, enabled birds to complete a circuit around the dam, rather than having to stop and turn around.

We grow all the trees ourselves in the horticultural centre and we have improved our propagation skills. We are also growing many of the trees, shrubs and ground covers for the Aboriginal Park, Girinyalanha developed by Sid Parissi and his team.  This is requiring quite complex propagation skills and is a steep learning curve for us, compared to simply growing farm trees which is relatively straightforward.

Our Peregrine Falcon project started eight years ago in 2008.  We noticed some Peregrines using the water tower as base for hunting.   It occurred to us that if we installed a next box in the empty space in the top of the tower, there was a possibility they might breed in there.  After a year they did just that and they have used the box for breeding every year since.

Now we are into our ninth year of young Peregrine Falcons being produced in this nest box.  We are also into the fifth year of formal research into the breeding behaviour of the birds.  We have two webcams installed in the next box so we can observe their behaviour day and night. There’s a website that I update during the breeding season daily and out of breeding season weekly.  It is interactive so people can comment on what they are seeing and we have fans all over the world, some of them are quite dedicated.

We have three youngsters flying about the campus at the moment, the parents are teaching them how to fly, how to catch their prey on the wing.  At the moment they don’t actually realize that birds are food. I was watching one yesterday and a Red Wattlebird landed next to a juvenile Peregrine and she just looked at it as if it was a neighbour, not potential lunch.   Parents will teach them for another few weeks.

A new planting site is becoming available and is a very exciting project.  Lens Gully is the main drainage line through the campus is a very large area nearly 100 metres wide in some places.  I’m positive it will be a very effective wildlife corridor.  We’re just waiting for the fencing to be finished and we will wait until autumn to start tree planting. It will take more than one planting; it could take years in fact.”

“The most significant change from a sustainability initiative on the Orange campus has been our possum relocation project.  It is most significant due to the impact it has had on the building occupants due to improved hygiene and noise levels, decreased maintenance and it has benefited the possums and other wildlife in with the creation of new habitat.

Previously at the end of 2015, we received a lot of complaints from student residents about possums getting in and around the dorms.  They got into the rooves and defecating through the roof into bedrooms, kitchens and bathrooms.  They created big messes and would fight over territory in the roof spaces creating a loud racket.  Sometimes they would even kill each other and start decomposing in the roof.  This problem was constant on our bush land campus.

I did some research and discovered possum boxes as a potential habitat solution.  We received a Grass Roots grant through CSU Green for $900 which covered the costs of making the wood boxes. We supporting a local business who build 12 cypress pine possum boxes.

We installed them in various locations around the residences up in the trees.  To entice them in, we sat a piece of apple at the door and it worked very well.  This was only done once, possums moved in by themselves as evident by fur around the entry holes.  Once I took a look inside one box and a baby possum ran up my arm nearly causing me to fall off the ladder!  Now I put my phone on a selfie stick to inspect the boxes.  It is a real measure of success that breeding has occurred in our boxes.

Since then we have received no complaints about possums inhabiting any of the rooves.  This has reduced the workload for the cleaners and Division of Facilities Management.  Most importantly it has improved the students’ experience.  Now residents can enjoy our wildlife including lorikeets, honey eaters, galahs, butcher birds and bees in their natural habitat.” 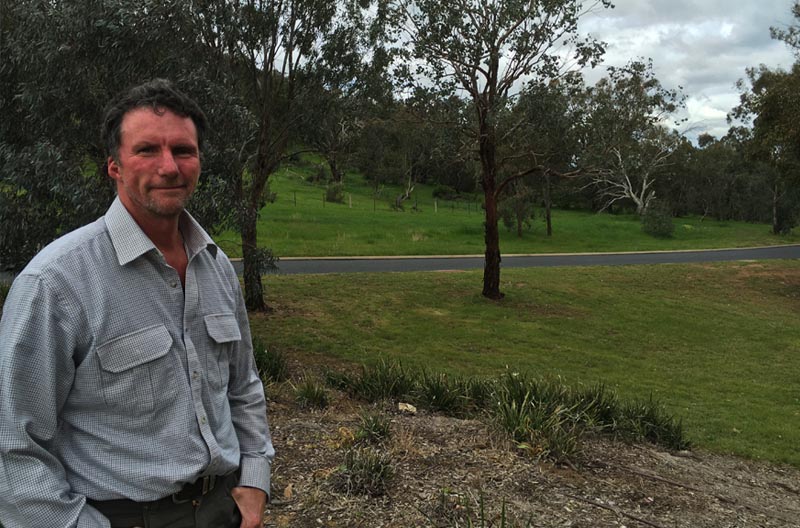 “Some of the changes that have occurred since July 2015 since the LiFE Biodiversity baseline workshop include plans to create eco walk pathways giving access to Chair Hill and the identification of areas which are left to return to their natural state. The most significant change, however, has been a change in attitude and management around the mowing of the low profile areas on the Wagga Wagga campus.  There has been a mindset change to reduce our mowing regime.  Attitudes have changed around where we mow, and where not to mow, as determined by building assets and fuel biomass build up.

Previously, we were told we had to mow an area and we just did it.

We improved our efficiency and think more about the environment and enhancing biodiversity. We have improved attitudes to how we approach the management of our grounds.  We don’t just mow areas because that is what has always been done.

Now, we have less maintenance, less wear and tear on machinery and more resources available for more intensive maintenance on the landscaping around campus.  This mindset change also ensures we identify areas of high conservation value to meet our biodiversity targets.

Since we reduced mowing, the natural areas have been broad leaf sprayed with a selective chemical and left to self-seed increasing the seed bank.  It is very clear that locally endemic native grasses are now prevalent.  Conditions are now very favourable for natural regeneration of these endemic grasses including Tall Spear Grass, Small Spear Grass, Wallaby Grass, Chocolate Lillies, Dianellas, Lomandras and Kangaroo Grass.  Endemic shrubs including Black Wattles small understory Acacias and trees including Callitris are also regenerating.”

Vignette: Photo-point monitoring enables us to understanding the effectiveness of our biodiversity management practices on campus. 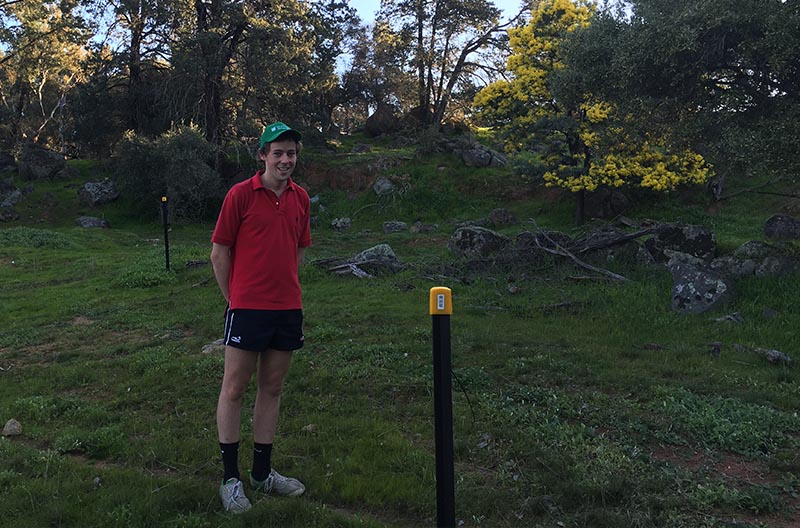 “Some of the changes that have occurred on the Wagga Wagga campus as a result of implementation of the CSU Biodiversity Management Plan between February to August 2016 include the removal of noxious weeds; creation of habitat through the planting of 1100 trees on tree planting day; consultation around the establishment of educational interpretive signage on the hill walking track; and the installation of a system of photo-point monitoring sites.

The most significant change has been the photo-point monitoring sites because it ensures we can assess the effectiveness of our biodiversity management practices over time. This is important given the significant investment in dollars and time the university makes to biodiversity conservation on campus. Additionally, this monitoring system is a potentially valuable community engagement education tool. Photo comparisons will make it easier to analyse changes in the composition of flora over time at each site.

Until now, we have only been able to monitor vegetation change through surveys conducted at three to five year intervals. This new monitoring system is the first in a series to be implemented, which will give us additional and more "real-time" feedback on our efforts.

The project involved researching what needed to be considered when establishing a photo-point monitoring program. Then appropriate sites were selected based on that information and star pickets were installed at 32 sites. Finally, we commenced the collection of baseline data in the form of photos ​and written observations at each site.

Now the system is in place, we will be able to make comparisons between sites and analyse the images over time. This will enable us to improve our understanding of the effectiveness of our biodiversity management practices.”