Energy - What You Can Do 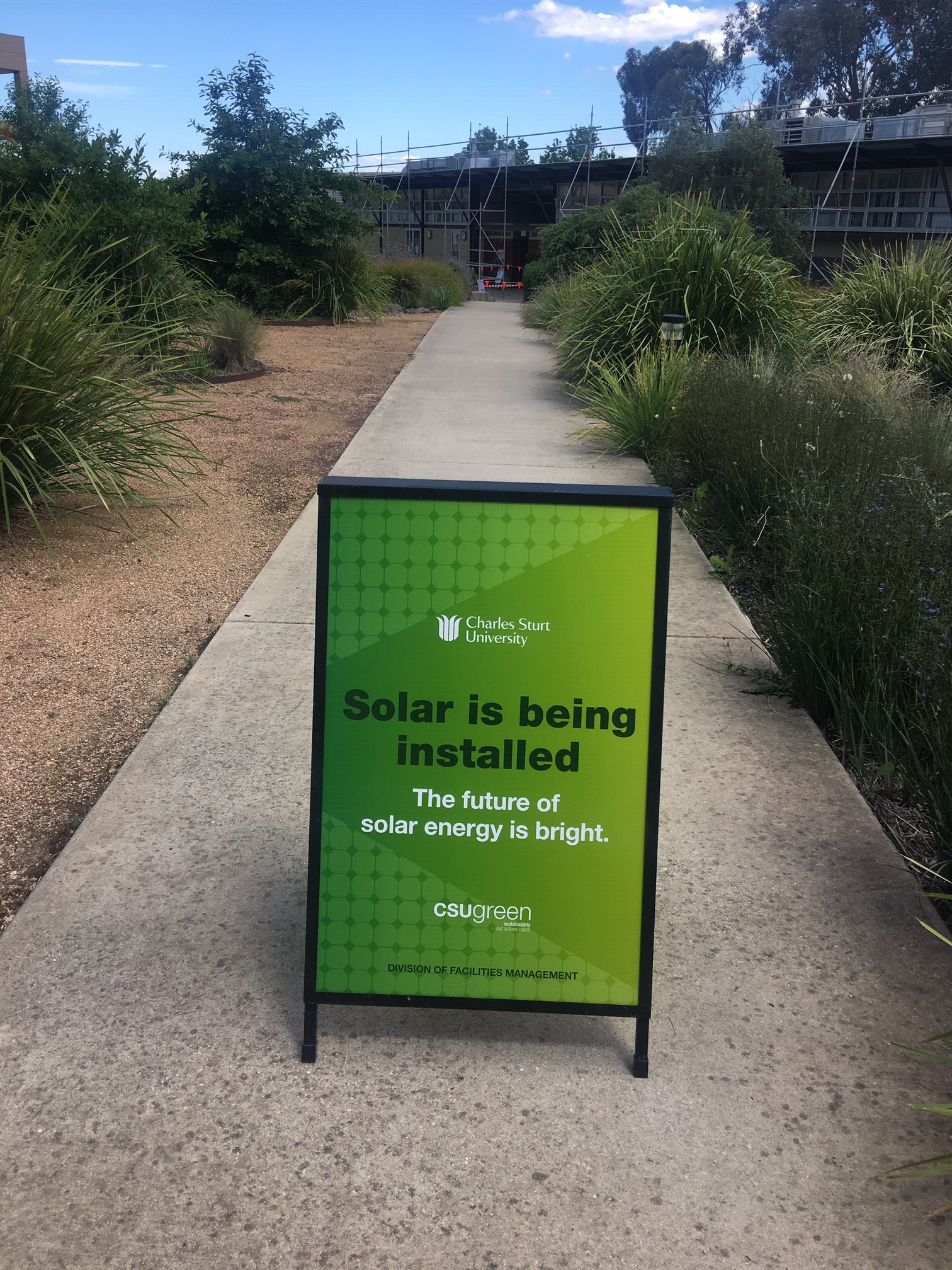 This framework has been placed with Water to form the action plan for Utilities.

As a student or staff member at CSU there are a number of ways you can help us to save energy:

What we are doing

We recognise that onsite generation of renewable energy is an integral component of what we need to do to reduce our carbon footprint and maintain our carbon neutrality.

We have three solar installations:

New installations commencing from October 2018 to 2019:

Solar to begin at Albury-Wodonga, Bathurst, Dubbo and Orange

Charles Sturt University will soon commence the installation of solar panels that will provide the University with over 2500 kW of renewable energy across its Albury, Bathurst, Dubbo and Orange campuses. The installation will add to the existing 1700kW solar energy generation at CSU in Wagga Wagga; one of Australia’s largest solar rooftop projects on a single site.

On-site renewable energy generation is a critical part of the University’s aspirations to source all of its energy needs from renewable sources. Staff, students and community welcomed the first phase and the University looked forward to providing Dubbo, Albury, Orange and Bathurst with the significant benefits that this clean energy brings.

CSU created an environment that prepares students to meet current and future challenges. Bruce Barkworth, a mature CSU cadet engineer, is a key part of the team. His past experience and student excellence have benefitted our project.

CSU is focused on reducing energy wastage, improving efficiency, getting off natural gas and lowering emissions.

The Solar photovoltaic (PV) panels have been installed on the rooftops of 17 buildings at CSU in Wagga Wagga. At the time of installation, this system was the largest rooftop-mounted solar energy system on a single site, anywhere in Australia. This project will significantly increase the proportion of CSU's energy that is supplied from clean sources and will reduce our carbon footprint.

Specific buildings have been fitted with rooftop-mounted solar panels where the energy generated by these panels will, in the first instance, supply energy demands in the building and then any surplus energy is exported back into CSU's own private high-voltage network. This means that the energy generated by the solar panels can be used by any building on the campus.

This amount of carbon dioxide saved each year is equivalent to:

How do solar panels work on campus?  View illustration

Produced by the School of Communication and Creative Industries

In October 2014, we commissioned a 630 kW cogeneration engine at our Bathurst Campus. The cogeneration unit, or cogen for short, burns natural gas in a gas engine to generate electricity, which is then fed into the high voltage network at the University. Our site uses the electricity generated by the cogen before it uses electricity from the grid.

At the same time, the heat generated by the engine is captured and used to heat water, which is used to heat buildings and domestic hot water.

Because we're getting two outputs (electricity and hot water) from the one input, the cogen unit improves the efficiency of our energy supply and helps to reduce our carbon footprint.

"Many changes have occurred at CSU relating to the energy framework under the LiFE Index including roof top solar installations at Bathurst, Port Macquarie and Wagga Wagga; energy performance contracts at Bathurst and Wagga Wagga; and improvements in the coverage of the sub-meters measuring CSU's energy consumption.

However, the most significant change has been the Cogen (Co-generation) project installed at CSU Bathurst.  The Cogen project is new to the university so it was a bit of a challenge which has subsequently had a big impact on reducing our carbon footprint.

Previously, all electricity was purchased from the grid and hot water was produced in the gas fired boilers at Bathurst.

In late 2014 the Cogen was commissioned, it operates by burning natural gas to generate electricity on site, at the same time it captures the waste heat produced from the engine to generate hot water.

It has significantly reduced our carbon footprint because the Cogen is much more efficient that purchasing electricity and gas separately. It has been a good learning process for our operations team to gain knowledge around the workings of this piece of equipment and has significantly contributed towards CSU being certified as carbon neutral in July 2016."

Vignette: Replacement of the electric hot water systems with solar

"Possum boxes, security light inspections and the green waste organics program are some of the changes that have occurred at CSU Orange around sustainability.

However, the most significant change has been the replacement of the electric hot water systems in residence 1050-1054 and 1060-1063 to solar hot water with increased storage capacity.

CSU Green developed the tender documents for the installation of a solar hot water system to replace the existing electric hot water systems. A contractor was engaged and the new system was installed in 2013/14.  A total of 22 solar tanks were installed using the evacuated tube system on the resident's rooves.

We faced some challenges with the installation of the solar system, tanks were leaking with controllers and pumps failing with the first 12 months.  CSU Green engaged a consultant and rectification works were arranged.  Further failures in 2015/16 led to the replacement of all remaining hot water tanks, controllers and pumps with headers installed where dual tank were in place. In 2016 the new installation of approved Apricus solar tanks was completed and new roof header units were installed with the replacement of approximately 100 evacuated tubes.

The system is now working 100 percent with decreased requirement for the electric backup. CSU Green undertake energy reporting and we anticipate a significant reduction in power usage in the residence buildings. We are now confident that the capacity of the solar system storage will meet the demands for hot water by the residents in these buildings."

CSU entered into the EPC, or Energy Performance Contract, to help improve energy and water efficiency across a range of buildings. The energy savings calculated in the contract are guaranteed.

These are the steps involved in the process:

At CSU, the energy savings opportunities we've included in our EPC are:

We have a comprehensive network of sub meters. Over 500 sub meters cover electricity, gas, water and thermal energy (chilled and hot water) across all of our campuses.

The meters help us to measure and monitor where we're using our energy to identify the largest energy users and focus efforts on improving their energy efficiency. We'll also see abnormal trends in energy usage and can investigate why these are occurring.