New research from the National Wine and Grape Industry Centre (NWGIC) has an important message for growers using tissue analysis to estimate the nutrient requirements of their vines – use the whole petiole. 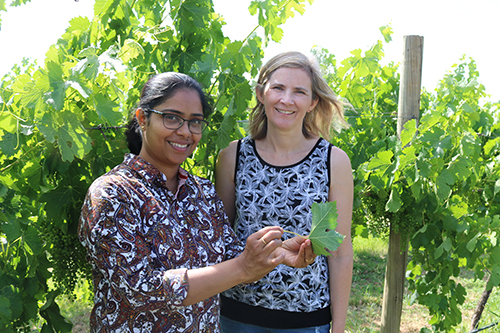 “The current guidelines for petiole analysis recommend collecting samples from opposite bunches at 80 per cent flowering with a representative sample of at least 100. Our research has also shown it’s also important to collect the whole petiole, as the results can vary in the leaf stalk.”

The researchers analysed more than a thousand samples collected at flowering across three varieties, Cabernet Sauvignon, Shiraz, and Chardonnay.

“We looked at three petiole segments, and compared them with the leaf blade and the bunch stem,” Dr Rogiers said.

“We also assessed the nutrient levels in the leaf opposite the lower and upper inflorescence on the shoot.

“The study found the level of most elements were lower in the middle, narrow portion of the petiole.

1. When removing the petiole from the vine take the whole petiole and pinch off the blade as close as possible to the end of the petiole.

The research is part of a Wine Australia-funded project that aims to optimise nutrient application to vines.

As part of the project the NWGIC researchers hope to make recommendations on how to refine tissue sampling protocols and to develop an app that will help with nutrient disorder identification in grapevines.

The NWGIC is an alliance between Charles Sturt, the NSW DPI and the NSW Wine Industry Association.