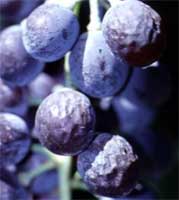 The water economy of the grape berry

To characterise the physiological factors that impact on the water budget of the berry - in particular, xylem and phloem flow into the berry, backflow from berry to the vine, and berry transpiration rates