Young vine decline in the Riverina, New South Wales:
an investigation into the role of pathogenic fungi such as the Petri disease fungi (Phaeomoniella chlamydospora, Phaeoacremonium spp.) plus Botryosphaeria, Cylindrocarpon spp. Fusarium spp.and some Pestalotia-like fungi.

Fungal infection of grapevines by soil/root transmission; the replant question:
investigations into the problems associated with replanting new grapevines into soil previously occupied by diseased vines.

Biocontrol of grapevine fungal pathogens
with actinomycetes and bacteria isolated from vineyard soils.

Young vine decline (YVD) has been both stressful and costly for many growers who have planted or replanted Chardonnay vineyards during the past decade. Affected newly planted vines can die soon after planting. Vines that do survive can fail to thrive and produce low yields for many years.

YVD is caused by a fungal disease complex. We have isolated plant pathogenic fungi Cylindrocarpon, Petri disease (or ‘black goo’) fungi (Phaeomoniella and Phaeoacremonium) and Botryosphaeria fungi from the roots and trunks of declining young grapevines in the Australian Capital Territory, Hunter Valley, Mudgee and Big Rivers (including Riverina, Murray-Darling, Swan Hill, Dareton and Perricoota) regions. Most of these have also been isolated from declining young vines in California, but it appears that we are the first to routinely find Botryosphaeria in the roots and lower trunk of grapevines, indicating that the fungus has not originated from pruning wounds.

Our results show that the YVD causing fungi were either associated with spores contained in the soil, or carried by root or shoots when grafted,   Cylindrocarpon migrates up from the roots to the vine trunk, blocking the xylem and degrading the wood of the lower part of the rootstock (Figure 1). With most of the xylem blocked, the vine cannot transport sufficient water upwards.

Figure 1. Cylindrocarpon macrodidymum fungal mycelium (hyphae, strands) in the grapevine’s root clogs up the root and then the xylem. (* = fungal mycelium).

As our early results also showed that increasing the soil carbon improved the shoot growth rate, we decided to evaluate Biochar and two types of compost (green waste compost and cow manure compost) to increase soil organic matter. Within eight months of application, both composts and Biochar had increased the root density back to healthy levels in the field.   Our ongoing studies will continue to evaluate whether these changes are temporary or permanent.

Results from preliminary pot experiments using potting mixes and loam show that environmental stressors (water deficit with soil glyphosate applied at 0.4, 0.8 and 1.6 kg a.i./ha) increased the severity of the disease symptoms caused by Cylindrocarpon.  However, more work is needed before we can be sure about this on different types of real field soil.

Other forms of vine stress can result from over-watering or over-cropping leading to low carbohydrate reserves. We are currently investigating the effect of the YVD fungi on carbohydrate reserves in grapevine wood and roots.  In the 2009-10 season we have found that, before bud burst, diseased vines had similar root starch levels but lower glucose or fructose levels than healthy vines.

Root knot, root lesion, spiral and ring nematodes were found on many of the roots of YVD vines, suggesting that they are involved in the disease process, perhaps by injuring the roots or by interacting with the fungi. This is supported by our recent finding that when Chardonnay rooted cuttings were planted in cores of vineyard soil, the root dry weight was correlated with higher nematode numbers (most of which are beneficial) and decreased numbers of pathogenic nematodes 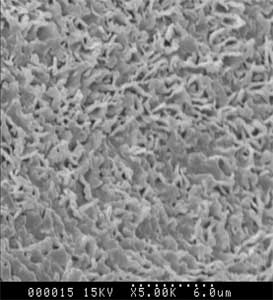