Comparing Paterson's curse plants from Australia with those found in Spain and Portugal has given researchers from the Graham Centre for Agricultural Innovation new understanding of why the weed is such a successful invader. "The plant was introduced to Australia in the mid-1800s from the Iberian Peninsula and my research involved traveling to its source to look at chemical clues to better understand how Paterson's curse has evolved in the Australian environment.

"The research collected samples from numerous plant populations from Australia, Portugal and Spain to examine the genetics, ecology and chemistry of Paterson's curse in various locations. In particular I analysed the bioactive secondary compounds produced by the Paterson's curse shoots and roots which play a role in plant defence.

"I found Paterson's curse plants established more densely in Australia and produced up to six fold higher levels of antimicrobial and phytotoxic compounds (naphthoquinones) in their roots."

"This research is significant because it's shown that multiple mechanisms, including enhanced genetic diversity, production of root-based defence chemistry, prolific seed dispersal and in some cases a lack of other plant competitors have contributed to the continued spread of this species across 30 million hectares in Australia," Professor Weston said.

"In contrast, in its native range in the Iberian Peninsula, the species is often difficult to locate amongst biodiverse flora and is not considered to be a serious pest." 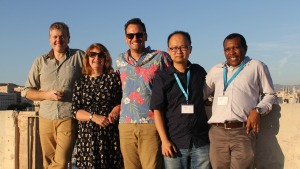 Other Graham Centre researchers who presented their work at the Congress from Monday 24 to Friday 28 July included Professor Weston and PhD student Mr James Mwendwa.

The research team also picked up the International Allelopathy Society's Grodzinsky Award for the best research publication written over the past three years, in a global competition for best publication in the field of allelopathy. Dr Xiaocheng Zhu and Professor Weston accepted the award at the Society's gala dinner at the Old Fort in Marseille on July 27, 2017.

Their paper 'Identification and localization of bioactive naphthoquinones in the roots and rhizosphere of Paterson's curse ( Echium plantagineum )', a noxious invader was published in the Journal of Experimental Botany in 2016.

Mr Skoneczny was awarded a scholarship from University of Aix Marseille to attend the IAS Congress.