Competitive crops to beat the weeds

New research through the Graham Centre for Agricultural Innovation into the genetic traits that make some varieties of wheat and barley better at out-competing the weeds will be outlined at a field walk on Tuesday 12 September. 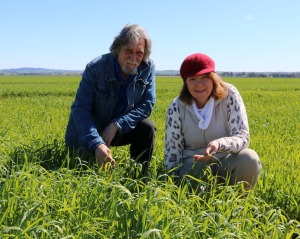 Dr Brown said, "This is the fourth year of the project and we've found that crop height and vigour are important early in the season for competitive crops and subsequent weed suppression.

"Tillering characteristics, both above and below the ground, along with canopy and root architecture are also important for the crops ability to out-compete the weeds. These characteristics also improve the yield potential by providing greater access to moisture and nutrients."

It's hoped the findings can be used by plant breeders to incorporate these weed suppressive traits into more commercial grain cultivars.

Professor Weston said, "As more herbicide resistant weed populations develop it's important for growers to look at other ways of managing weeds and growing highly competitive crops is one option."

The research is a Grains Research and Development Corporation (GRDC) investment.

The event will also provide an opportunity to view some of the demonstration trials of the Syngenta Learning Centre which has been established at the Graham Centre Field Site.

The Twilight weed and crop walk will be held from 3:15 pm at the Graham Centre Field site, at the corner of Coolamon Road and Prices Road near Wagga Wagga.