Charles Sturt University (CSU) PhD students have taken a break from their own research to mentor primary school students from Wagga Wagga in a science education program.

The students from the ARC Industrial Transformation Training Centre for Functional Grains ( FGC) are working with Year 5 students from Mater Dei Primary School as part of the MyScience program. 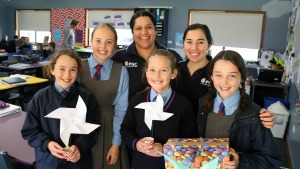 Over the past three weeks the FGC students have been working with groups of primary school children to design and carry out an experiment related to energy.

PhD student Mr Stephen Cork said, "The MyScience program does a great job at hands on teaching core scientific principles of seeing a problem, defining a hypothesis, testing the hypothesis by changing one variable and controlling other variables, then measuring and reporting the findings. It is also a privilege to be able to give students real life exposure to people who have chosen science as a career."

The program will culminate in an expo at the School on Tuesday 12 September where the students will showcase their experimental results.

Mater Dei Year 5 classroom teacher Mr David Enever said, "Most students have loved taking charge of their own investigations, under the watchful eyes of their Functional Grains Centre mentors. Some have come up with some really creative investigation ideas linked to improving the production of renewable energy."

PhD student Ms Michelle Toutounji has enjoyed her role as mentor and is looking forward to the expo.

"I hope that I have planted seeds of imagination and enthusiasm for scientific investigation.  The future of the next generation of scientists looks bright," Ms Toutounji said.

Funded by the Australian Research Council, the FGC is an initiative of the Graham Centre for Agricultural Innovation.

Media Note: The MyScience expo will be held from 2pm to 3pm on Tuesday 12 September in the Year 5 classroom at Mater Dei Primary School, 63 Gregadoo Road in Wagga Wagga. To attend contact Graham Centre communications and web officer Emily Malone on 0439 552 385 or email emalone@csu.edu.au