Research through the Graham Centre for Agricultural Innovation has added to our understanding of how adding vitamin D and calcium to the diets of pregnant ewes can reduce production losses. 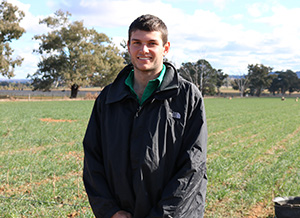 "Clinical hypocalcaemia, can compromise the health of ewes and result in death. It's estimated to cost the Australian sheep industry up to $11 million each year," Mr Keogh said.

The research involved providing a loose lick dietary supplement that contained a combination of an active vitamin D metabolite (marketed as HyD®) and calcium to pregnant ewes during the last six weeks of pregnancy.

"The role of the HyD® is to increase the intestinal absorption of calcium and therefore increase the plasma calcium of the ewe," Mr Keogh said.

"We found providing this supplement significantly improved the plasma calcium levels prior to lambing in treatment groups in comparison to the control group.

"The proportion of ewes that fell into the hypocalcaemic range was also far greater in the group that didn't receive the supplement."

Mr Keogh will graduate in a ceremony at CSU on Tuesday 12 December, he is one of 11 Honours students whose research has been supported by a Graham Centre Honours Scholarship.

"Undertaking this Honours project highlighted to me how important research is for the improvement of livestock production," Mr Keogh said.

"It was really exciting to see results that could provide really important information for sheep producers throughout Australia and potentially decrease their production losses during pregnancy."

The research was part of a larger project jointly funded by Meat and Livestock Australia (MLA) Donor Company, DSM Nutritional Products and CSU.