It's not 'hairy' but Hillman's panic grass

Research from the Graham Centre for Agricultural Innovation is debunking the widely held belief that the wind-swept grass on fence lines in the Riverina is ‘hairy panic’. 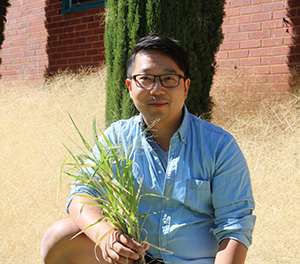 “Many panic grasses are categorised as noxious weeds and cause crop and pasture losses due to competition, as well as photosensitisation in grazing livestock,” Mr Chen said.

“They produce a panicle inflorescence, or flower heads, which detach at maturity and at this time of the year you often see them tumbling in the wind, accumulating on roadsides, along fence lines and in yards.

“It was thought that the native hairy panic (P. effusum), and the introduced panic weed witchgrass (P. capillare) were the most common species in southern NSW.

Hillman’s panic grass is a noxious weed introduced from the southern United States to South Australia and Victoria in the 1900s.

“The discovery that Hillman’s panic grass is now the dominant Panicum species in southern NSW is significant as we have not yet studied the ecology of this species in Australia, but find that it is rapidly spreading across Victoria and NSW, due to wind-blown movement of its panicles and its ability to easily establish in fields under conservation tillage,” Professor Weston said.

“It has recently been reported to cause photosensitisation in sheep, which can result in severe skin irritation, fleece loss, liver damage and in some cases death.

“Our research aims to profile the potential toxicity of Hillman’s panic grass, and other related Panicum speciesto help producers improve their management of outbreaks of photosensitisation in livestock. Knowing which toxic grass species are present is a key part of this strategy.”