World Migratory Bird Day: a reminder of our interconnected world

Years spent catching wild migratory birds and living in remote parts of northern Australia and Papua New Guinea for his research into the relationship between people, parasites and native pigeons, has given Dr Andrew Peters a unique perspective of their ecological importance.

The Charles Sturt University (CSU) senior lecturer and researcher at the Graham Centre for Agricultural Innovation shares his thoughts ahead of World Migratory Bird Day (WMBD) on Saturday 12 of May. 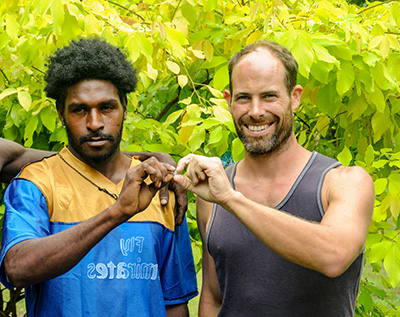 Migratory birds tell us something about the deeply interconnected biological world we live in. On Christmas day 2012 I was enduring sweltering heat on the banks of the mighty Fly River of New Guinea. A villager approached me to explain that some months earlier a metal ring was recovered from the leg of a large fruit-eating native pigeon caught by a local man. Incredibly, I had banded the bird with this ring a year and a half earlier on a coral island near the tourist resort town of Port Douglas in Australia, 940 kilometres to the south.

The connectivity of these two disparate worlds struck me then as it does to this day. These birds, Imperial-pigeons, are critically important seed dispersers in the rainforests of northern Australia and New Guinea and are culturally significant in both regions. In New Guinea they are a valuable and sustainably harvested source of protein. On the east coast of Australia, the species was heavily hunted in the early twentieth century and suffered dramatic decline with many populations nearing extinction. Following protection these populations are gradually recovering.

Human communities - European Australians and Indigenous people of northern Australia, Torres Strait and New Guinea – were tied together by a migratory bird and the actions of one community could have significant ramifications for ecosystems and livelihoods far away.

The physical reality of this connection was an epiphany. As an expert on disease in wildlife I am constantly reminded of how seemingly distant and unconnected events flow through the biological world and have entirely unforeseen consequences. The clearing of lowland rainforests may have driven the appearance of deadly Hendra virus in horses and people. The historic use of a toad for biomedical testing probably contributed to the extinction of more than a hundred species of frogs around the world, including six in Australia, through the spread of chytrid fungus. The introduction of possums to New Zealand for fur has prevented that country from being able to eradicate the scourge of bovine tuberculosis.

We live in a deeply connected living world in which every action springs forth a river of consequence which may take decades to manifest. Migratory birds remind us of that and World Migratory Bird Day is cause to reflect on how our own relationship with the environment is shaping our future planet.

Dr Andrew Peters is a senior lecturer in veterinary pathology at CSU's School of Animal and Veterinary Sciences and a member of the Graham Centre for Agricultural Innovation.

He is an avian veterinarian with experience and expertise in wildlife population health and evolutionary biology. His research focuses on the evolution and conservation significance of ancient and emerging pathogens of wild birds.