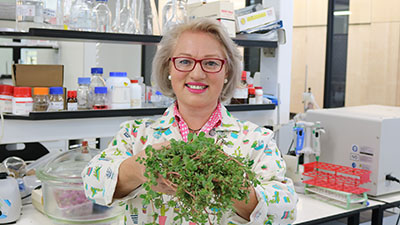 She gave a presentation at the 26th Annual Royal Australian Chemical Institute Research and Development Topics Conference in Canberra in December 2018.

Her presentation titled ‘Bioactive compounds in Australian Portulaca oleracea varieties with potential for treatment of Diabetes Mellitus and related conditions’ was well received and attracted a lot of interest from the audience.

As part of the research Ms Geier has tested three populations of purslane.

“One is a local population of common purslane while the other two are unique populations sourced from Kapitany Concepts”.

“All three have showed antioxidant activity and the presence of betalains, which are relatively uncommon coloured compounds found in only one order of plants. They have recently shown the potential to treat a variety of conditions including diabetes.

“I’ve isolated of a variety of betalains and other phenolic compounds previously unknown in purslane and tentatively identified a new compound with the likelihood of antioxidant activity.”

Ms Geier has now completed her Honours project and is planning to continue her chemistry studies with a PhD on medicinal plants of the Wiradjuri nation.