Graham Centre for Agricultural Innovation research has shown a link between cropping practices and the evolution of herbicide resistance in the weed annual ryegrass, highlighting the need to rotate chemical and non-chemical weed control. 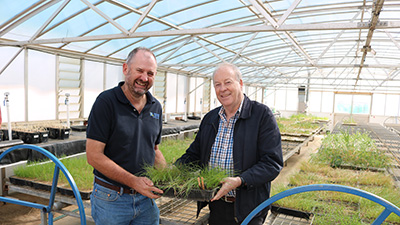 Charles Sturt University (CSU) researcher Dr John Broster said, “Herbicide resistance in weeds is common in southern Australia and is a costly problem for the grains industry. Annual ryegrass has developed resistance to numerous chemicals and this research gives us insight into how resistance has evolved and how it’s associated with different cropping practices.”

It was based on the results of 4500 annual ryegrass samples collected across southern Australia in random paddock surveys and screened for resistance to commonly-used herbicides.

Using a GIS database the researchers studied the association between the extent of resistance to different herbicide modes of action, geographic distribution of resistance across southern Australia, and farming practices in particular regions.

“Cultural practices, including the choice of crop species, cultivation and management of crop residues, plus the soil pH influence the choice and use of herbicides and thus can either directly or indirectly influence the development of resistance over time.”

“Herbicides are a tool for controlling weeds. Their misuse or overuse have consequences and herbicide resistance occurrence indicates that insufficient attention has been paid to the rotation of herbicide modes of action and that survivors of herbicide applications have been allowed to complete their life cycles,” Professor Pratley said.

ABS data for the research was supplied by Kynetec.