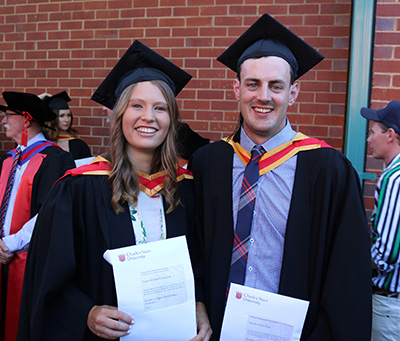 The students from CSU’s School of Agricultural and Wine Sciences conducted their Honours research projects as part of the Southern Cropping Capacity Building project co-funded by the Grains Research and Development Corporation and  NSW DPI, which supported their study and employment.

In a year where the Riverina experienced an extreme number of freezing morning temperatures, Mr Petty’s Honours research focused on the management practices to reduce the impact of frost damage on wheat.

“Wheat is the most sensitive cereal crop to frost damage, and frost during the critical reproductive development stages limits the yield potential of the crop,” Mr Petty said.

“My research investigated if the freezing point of sensitive plant tissues can be altered through manipulating water-soluble carbohydrates (WSC) during reproductive development.

“We manipulated the WSC through either shading in glasshouse experiments or by varying Nitrogen fertiliser treatments in field trials.”

Ironically, the 92 frosts during the growing season resulted in significant frost damage in the field trials, limiting the ability to assess the impact of the fertiliser.

“From these findings the concept of freezing point depression during reproductive development needs to be further investigated,” Mr Petty said. “Increasing WSC concentrations through varietal selection and targeted nitrogen management may offer an additional management practice to mitigate losses to frost.”

“Plant growth regulators are used to reduce plant height in cereals, particularly in farming systems which are susceptible to lodging such as in high rainfall areas or under intensive management,” Ms Simpson said.

“But there have been indications that applying these chemicals may also modify other plant characteristics, such as root growth.

“My research investigated the impact of two commonly-used PGRs, trinexapac ethyl (TE) and chlormequat chloride (CCC) on the root growth of the barley cultivar Compass.

“I found that the application of TE and CCC at the recommended time of stem elongation didn’t effect root or shoot growth.

“But when applied during early growth stages, the response to TE ranged from inhibiting to completely retarding root growth, while it also significantly inhibited shoot DM, rate of leaf extension, and rate of tiller appearance.

“Further research into the interaction between PGRs and cultivars as well as environment is required to better understand plant response to the growth regulators. “

They graduated in a ceremony on Tuesday 12 December at CSU in Wagga Wagga.