Flip over a cow pat this spring and you might see the work of dung beetles.  Look out for the small tunnels where they’ve buried the dung into the soil, disturbing the manure and improving the flow of water and nutrients.

The $23 million project will be led by Meat and Livestock Australia (MLA) with the research being led by Charles Sturt University (CSU) through the Graham Centre.

Graham Centre Director Professor Michael Friend said, “This project aims to build our knowledge of the role that native and imported dung beetles provide in farming systems such as improving pasture and soil health and reducing the spread of flies and parasites.”

A CSIRO run program from 1964 to the mid 1990’s introduced dung beetles from southern Africa and southern Europe, with 23 species established in Australia.

“A key part of this research is developing a regionally specific dung beetle service to farmers supported with extension and monitoring activities,” Professor Weston said. “We’re also going to investigate the importation and mass rearing of three new species and two endemic species that should be more suited to conditions encountered across inland Australia.”

The five-year project is supported by Meat & Livestock Australia (MLA), through funding from the Australian Government’s Rural Research & Development for Profit program. 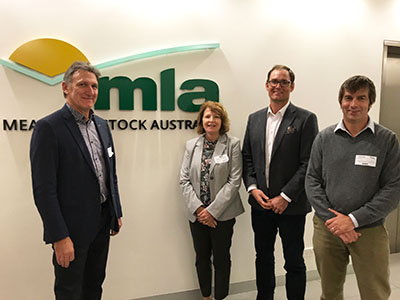 “Dung beetles play a critical role in grazing ecosystems. By burying dung in the soil, the beetles improve the flow of water, nutrients and carbon into the root zones of pastures, which improves pasture productivity. And by disturbing the dung, they prevent build-up of flies and worms which in turn improves animal productivity.

“In addition to investigating new beetle strains and giving some existing species a population boost, the project will quantify the economic and environmental benefits beetles provide to the red meat industry. We’ll also learn more about how to look after these little critters so that they can continue to do their good work into the future.”