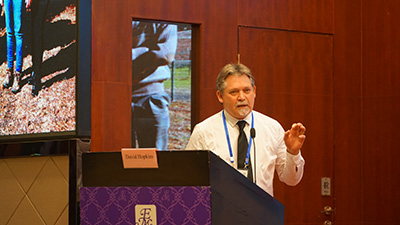 Dr Hopkins was invited to present the keynote paper ‘Australian lamb meat – recent developments and the challenges’ at the Conference in Nanjing, China.

“Since the 1980’s improved farm practices and increases in genetic gains have increased the average carcase weight of slaughtered lambs,” Dr Hopkins said.

“This has significantly aided Australian lamb exports to regions such as North America and helped to increase the amount of lean meat and decrease fat in lamb retail cuts.

“But it has created a challenge for the industry to utilise the larger carcases and extra cuts, and also to ensure eating quality is not decreased.

“This has reinforced the need for an effective eating quality grading system and thus Meat Standards Australia is further developing the system to provide eating quality of selected cuts.

“At the same time geneticists have been focusing on creating balanced breeding objectives for stud breeders that account for the antagonistic relationship between increased lean and decreased eating quality.”

Dr Hopkins’ presentation outlined this latest work and presented results on a recent large consumer survey which confirmed that one to two person households, which are the dominant size now in Australia, prefer lighter lamb roasts than those traditionally produced.

“To address this issue a new cut has been developed called the compact shoulder roast and this along with new packaging methods is designed to provide consumers lamb which meets their needs,” Dr Hopkins said.

New data on the nutritional value of a range of lamb cuts was also presented at the conference which attracted 350 Chinese scientists and also featured scientists from 10 countries.

As an Adjunct Professor at SDAU Dr Hopkins also met with a number of students to discuss their research programs, give advice on direction and experimental design and delivered two lectures to postgraduate students in the College of Food Science.  The NSW DPI Meat Science team at Cowra supervises a number of Masters students at SDAU and the Department has a Memorandum of Understanding with SDAU for scientific exchange.