The recent finding of fragments of the foot and mouth disease (FMD) virus in confiscated meat samples at Australian airports demonstrates the relevance of the work of the FMD Ready multidisciplinary research project.

Four sub-projects make up the FMD Ready project and include making sure Australia has access to the correct FMD strain vaccines, demonstrating the value of farmer-led partnerships in animal health surveillance, improving outbreak modelling capability and developing tools that would assist in determining how farm-to-farm spread is occurring. 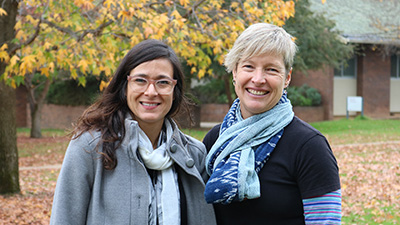 The Graham Centre is involved in the Farmer-led Surveillance sub-project undertaken by a team of researchers from CSIRO, Charles Sturt University and the Department of Agriculture and Water Resources. The subproject has been running five pilot groups within FMD susceptible industries in Australia: beef, pork, sheep, dairy and goat. These groups are developing innovative solutions to problems, identified within the groups, around surveillance and animal health management. Some of these solutions include teaming up with the local abattoir and a software company to improve producer feedback from the abattoirs, post mortem and sampling workshops and creating networks within previously fragmented industry sectors.

The sub-project has also developed a predictive Bayesian Network Model based on producer vulnerability to an FMD outbreak. With great contributions by producers across livestock industries about on farm practice and beliefs, the model might help decide how surveillance resources are allocated. Testing of the model will be underway in the second half of this year.

Associate Professor Marta Hernandez-Jover, who leads the Graham Centre team working in this project, said early detection of diseases like FMD is key for minimising the impact of these diseases on people’s livelihoods and the country’s economy.

“Working with farmers and other animal health stakeholders, investigating ways on how to improve early detection is crucial for finding feasible and sustainable solutions,” said Professor Hernandez-Jover.

Regular project updates can be found on Animal Health Australia’s Facebook and Twitter. For more information about the Project you can also visit http://research.csiro.au/fmd/

The Project is supported by Meat & Livestock Australia, through funding from the Australian Government Department of Agriculture and Water Resources as part of its Rural Research & Development for Profit program, and by producer levies from Australian FMD-susceptible livestock (cattle, sheep, goats and pigs) industries and Charles Sturt University (CSU), leveraging significant in-kind support from the research partners.

The research partners for this project are CSIRO, Charles Sturt  through the Graham Centre for Agricultural Innovation, the Bureau of Meteorology and the Australian Department of Agriculture and Water Resources, supported by Animal Health Australia.