An interest in soil science and a desire to learn more about new technology prompted Charles Sturt Bachelor of Agricultural Business Management student Joel Costello to apply for a summer internship at the Graham Centre for Agricultural Innovation. 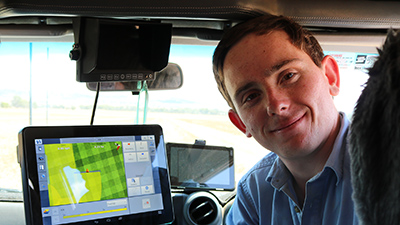 “My interest was founded at the family farm at Young when three years ago we invested in improving the application of both fertiliser and lime using variable rate technologies,” Mr Costello said.

“Since starting university, subjects surrounding new technologies in agriculture and soil science have peaked my interest.”

During the internship program he worked with researcher Jon Medway to gather data to generate a soil landscape map of the Charles Sturt farm.

Mr Costello was tasked with using aerial imagery and ground observations to develop an updated Charles Sturt farm map that will form the basis for an online GIS and farm record keeping system.

He then completed an electromagnetic survey of the arable areas of the farm using the Graham Centre’s new DualEM-HS21 sensor, which measures the soil conductivity simultaneously at six soil depths down to almost four metres. 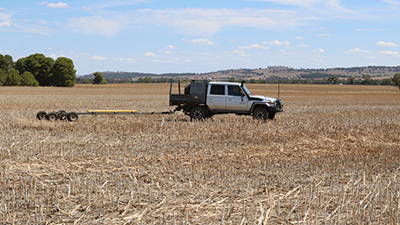 As soil conductivity is strongly correlated to a range of soil characteristics, this data will now form the basis for a program of targeted soil profile investigations to ultimately describe the spatial distribution of soils across the Charles Sturt farm.

This soil data will be integrated with historical satellite imagery, topography data, yield maps and historic farm records along with previously collected information to generate a map of historical productivity and ultimately, assessment of landscape capability assessment for ongoing management.

Mr Costello said the internship involved a wide variety of activities and gave him a good overview of precision agriculture.

“I was able to see many parts that together make up the research behind precision agriculture,” Mr Costello said.

“In particular, the importance of analysing the data that is collected to improve the productivity and profitability for producers.”

Mr Costello said the internship has inspired him to focus on improving his skills in spatial data and data analysis, something he believes will allow him to get the most out of his Bachelor of Agricultural Science studies.

“Many of the tasks undertaken as part of the internship can be directly applied to my future career.

“Learning how to use the mapping software, gaining an understanding of how to use guidance systems, and then how to apply these technologies to better the agricultural industry.”