Graham Centre researchers have been investigating if piggeries will be sufficiently secure from feral pigs if a major disease outbreak occurs near them. 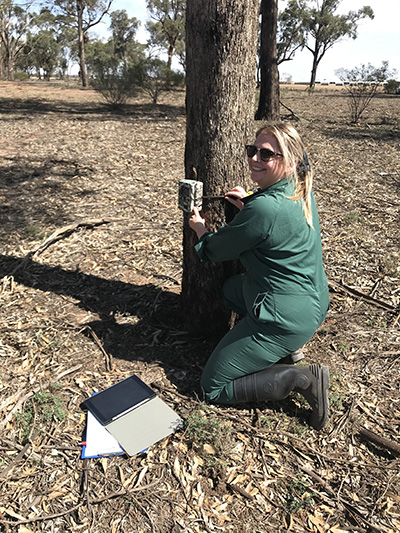 “African swine fever has spread globally. If Australia were to have an ASF outbreak, the impact would be devastating for our pig farmers,” said Ms Barrett, who recently completed her research as part of her degree with and the School of Agriculture, Environmental and Veterinary Sciences.

“Understanding the spread of the disease will help appropriate prevention to be implemented to protect our farm animals.

“The feral pig population found around Australia could become a potential source of ASF if it entered Australia.

“If ASF spreads in our feral pig population, our pork industry may face trade restrictions as well as economic, social and animal welfare implications.

“We conducted a risk assessment to identify the risk of ASF spread from feral pigs to domestic pigs,” she said.

Compartmentalisation and zoning are two biosecurity strategies that can be used to maintain trade in unaffected areas.

A compartment is a secure ‘barrier’ to separate animal populations such as feral and commercial pigs.

For international trade to continue where major diseases are present, compartments must be under the direct control and responsibility of the nation’s veterinary administration.

The risk assessment was conducted for commercial pig producers to assess their ability to ‘compartmentalise’ their pigs from nearby feral pigs in preparation for an ASF outbreak in Australia’s feral pig population.

“The opportunity for ASF transmission from feral to domestic pigs in a piggery must be negligible for compartmentalisation to be recognised for international trade,” Ms Barrett said.

“We used interviews with feral pig experts or ecologists and local pig producers, as well as information about current production practices and ASF to assess the risk, and then evaluated three commercial piggeries in southern NSW and northern Victoria.

"We found that even in areas with low numbers of feral pigs, commercial piggeries should protect themselves by using appropriate fencing, grids and gates to reduce the risk of feral pigs entering the property.

Ms Barrett believed that further investigation “of functional boundaries such as appropriate fencing and gates is needed to prevent disease transmission between feral and commercial pigs”.

“We can use camera traps to monitor the movement of feral pigs around the boundary of commercial piggeries - we can investigate this further in the future,” she said.

Ms Barrett was supervised by Dr Victoria Brookes and Associate Professor Marta Hernandez-Jover, with funding from the Graham Centre. The study was approved by the Charles Sturt Human Ethics Committee.