Dale Nimmo an AIPS Tall Poppy
Dr Dale Nimmo was among the thirteen young researchers from NSW who were recognized for their research achievements in 2016's  prestigious Tall Poppy Awards.  The awards, run by the Australian Institute of Policy and Science (AIPS), honour up-and-coming scientists who combine world-class research with a passionate commitment to communicating science. It is the first time that a researcher from Charles Sturt University has won a Tall Poppy Award.

Outstanding Outreach
Post-doc Dr Manu Saunders was one of six inaugural winners of the Office of Environment & Heritage/Ecological Society of Australia's Prize for Outstanding Outreach. Her topic "Where do pollinators hang out at school" has been chosen as the winners' research project with years 5-8 in schools around Australia, as part of CSIRO's  Scientists in Schools program.

Nancy Millis Science in Parks Award
ILWS researcher Dr Dale Nimmo who, in his previous role at Deakin University, was part of the project team which was awarded the 2016 Nancy Millis Science in Parks Award.The 10 year collaborative research project, led by La Trobe and Deakin Universities, with significant involvement from Parks Victoria and DELWP staff, has shown that the effects of a single fire could last for well over a century and that too-frequent fire could put the survival of threatened plant and animal species at risk. 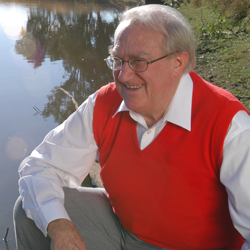 Adjunct Prof David Mitchell was named a Member in the general division of the Order of Australia in the 2014 Queen's Birthday Honours list.

The citation lauds Prof Mitchell for his "significant service to conservation and the environment, particularly wetland and water research".

Prof Mitchell grew up in Rhodesia, now Zimbabwe, and was trained as a secondary school science teacher at Cape Town University.  After working in the Rhodesian Herbarium during the school holidays, he became interested in ferns and ended up becoming a fern taxonomist.

While working in the Herbarium Professor Mitchell was asked to provide advice and comment on a water weed, thought to have been Salvinia auriclata,  invading Lake Kariba on the Zambezi River.  While doing post-doctorate research at the London University's college based in Rhodesia and Nyasaland on the water weed Prof Mitchell discovered the weed was a  new species which he described and named Salvinia molesta (ie the "nuisance salvinia"). The plant soon became a major weed in tropical waters throughout the world.

The subsequent work in this field led to Prof Mitchell becoming an authority on aquatic plants and he is the author of numerous scientific papers, reports and book chapters.  He was commissioned to edit and co-author a book Aquatic Vegetation and its Use and Control for the UNESCO International Hydrological Decade;  and has visited South and Central America searching for the origin of the weed; and worked for the United Nations Development Fund on the problems caused by the weed on the Sepik River in Papua New Guinea and on water bodies in several other tropical countries.

Prof Mitchell spent 16 years as an academic with the University College of Rhodesia and Nysaland (now the University of Zimbabwe), as his interests grew to include the limnology of artificial reservoirs and the ecology of wetland systems. He became director of the Nuffield Lake Kariba Research Station and directed the Hydrobiology Research Unit at the University in Salisbury, now Harare.

He first visited Australia in 1975 on sabbatical with the University of Adelaide where he undertook a consultancy reviewing the management of aquatic weeds in Australian freshwaters.  This led to his return to Australia in 1977 and a job with the CSIRO Division of Irrigation Research based at Griffith, NSW.

Prof Mitchell was appointed Chief Research Scientist and Officer in Charge of the reorganised Centre for Irrigation Research in 1981.

In 1986 he became the Foundation Director of the MDRFC and, in 1987, Officer in Charge of the Centre for Irrigation and Freshwater Research at Griffith. In 1988 he moved to Albury to direct the MDFRC on a full-time basis until 1993, establishing MDFRC as a functioning research group that fostered many young researchers.  He continued as Chief Research Scientist until his retirement from CSIRO in July 1995. 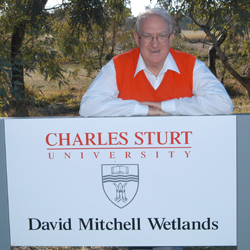 He then became an Adjunct Professor with CSU's School of Environmental Sciences, a member of the Institute for Land, Water and Society and became very involved with the establishment and development of the CSU campus at Albury Wodonga.  His expertise was put to use in his design of a wetland system to treat the campus's waste water via a series of gravel and reed bed wetlands to treat the water for safe addition to the existing lakes on the site. The resultant integration of on-site treatment and reuse of wastewaters and the collection, storage and efficient use of water on the campus has received several awards as well as attracting national and international interest. The wetlands were named the "David Mitchell Wetlands" in 2004 by the University in recognition of his excellence in, and commitment to, his field.

Since his retirement from CSIRO Prof Mitchell's scientific activities in Australia continued to focus on aquatic weeds and wetlands but also extended to the management of water resources.  He has been an active consultant and environmental auditor and a member of a number of local and national committees, including the Lake Cowal Foundation, some as Chair and some as an "independent scientist".

Among his awards are

And now his contributions have been recognised with an AM. The Institute and its members would like to congratulate Prof Mitchell on his many achievements.