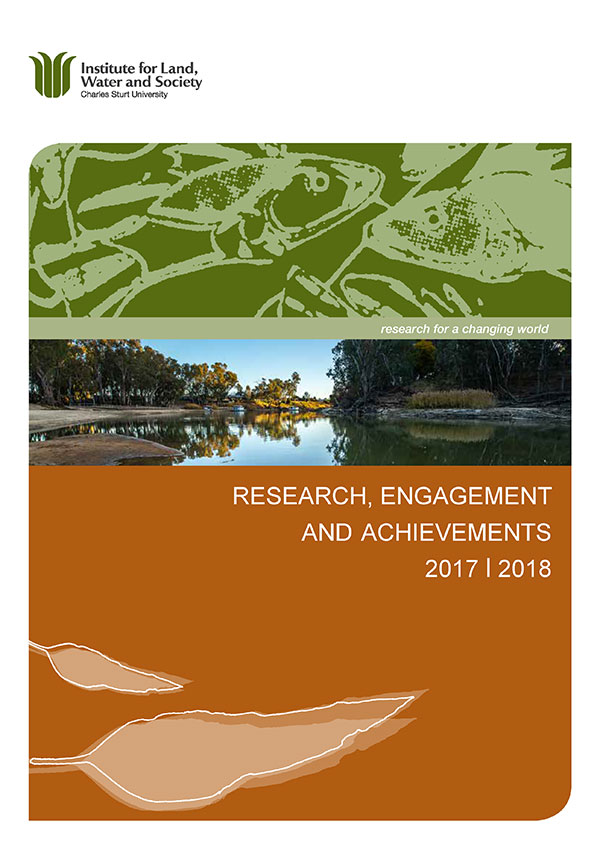 This biennial report demonstrates our recent successes with details about our research projects, engagement activities and accomplishments for 2017 and 2018.  Our work demonstrates a determination to undertake multi-disciplinary integrated research that intersects with our communities. Rural and regional communities, in particular, need to be well informed to address the many issues that must be considered when seeking sustainable progress.

In our backyard, there are pressing issues in the Murray-Darling Basin relating to maintaining biodiversity, agricultural productivity and rural social sustainability in the face of climate change and globalisation. As the limitations of our human-environmental system becomes more apparent, the search for better ways to connect scientific and local knowledge, including that from indigenous communities, with governance and policy becomes ever more pressing.

Our goal is to produce and connect that knowledge through a mix of individual and team-based interdisciplinary research initiatives.

With a critical mass of around 90 researchers and their associated networks working in and across a range of fields and disciplines, the Institute has substantial research capacity and influence to improve governance and management of regional scale issues. 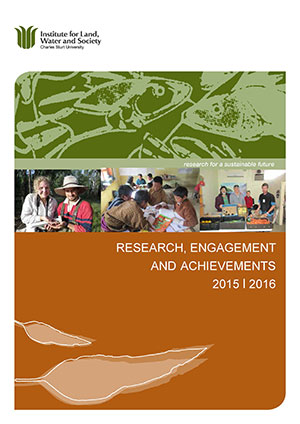 The 2015-2016  report summarises the Institute's research, engagement and activities during those years including for each of the Strategic Research Areas and research themes. It also includes details of members'  engagement and linkages at regional, national and international levels. When you look at the combined research efforts of our  members as a whole, the breadth, depth and diversity of our research  is impressive and substantial. The Institute's performance is on an upward trend. Over the past five years (2011-2015) the Institute secured  $10.55M in external research income which represents about 30% of CSU Research Centres' total external income combined over that period. Our publication performance has also improved and in 2015 our share of  the total CSU Research Centres' points was 43%. Over a five-year period (2011-2015) the Institute had a total of 455.36 HERDC points, which represents 37% of the total CSU Research Centres' points.

The Institute continued to build on its reputation as a leading research provider in Australia and overseas in 2013 and 2014. Several major projects were completed including a number funded by the Australian Research Council, demonstrating the Institute's ability to produce quality research outcomes aligned with its aim. This ability to deliver quality research outcomes was further recognised with the Institute's success in 2014 in securing almost $7M for two new five year projects funded by the Commonwealth Environmental Water Office. The Institute's Strategic Research Areas, first introduced in 2009, have continued to evolve and change with the new Food Security and Regional Australia SRA established in 2014.  The collaborative research undertaken by a group of the the Institute's terrestrial ecologists since 2007 was formalised, also in 2014, as a Biodiversity Conservation SRA and includes research -previously reported under the Ecosystems Services SRA. This report highlight's the Institute's research, engagement and achievements in 2013 and 2014 along with detailed reports on each of the SRAs. 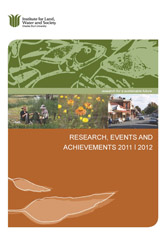 During 2011 and 2012  the Institute's Strategic Research Areas continue to represent its areas of research strength with a new SRA  - Improving Rural Livelihoods and Environments in Developing Countries - established in 2011 and the transformation of the Innovative Perspectives on Energy SRA into the Environmental Justice and Governance for Social Change SRA during 2012.
This report highlights the Institute's achievements, performance and activities for 2011 and 2012 and includes detailed reports for each of the SRAs and their research projects and activities. More details on our projects can be found at the Research Projects page 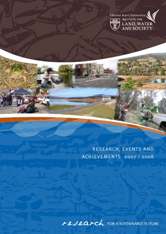 During 2009 and 2010 the Institute's research focus has concentrated on specific research areas - known as Strategic Research Areas (SRAs). These research areas are issue focused, team-based, interdisciplinary, underpinned by disciplinary excellence, and output and outcome orientated. The activities and research of the SRA's are featured in this report, along with summaries of some of the completed and current research projects. 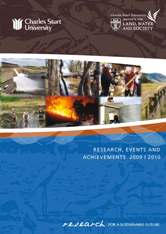 This report features the highlights and achievements of the Institute in 2007/08. Included in the report are details of completed and current projects and a feature on the three broad integrated research themes which were identified as the focus of multi and inter disciplinary research within ILWS. Each of these themes address critical issues facing the regions where CSU operates; has the potential to make a major contribution to knowledge, policy and community well-being; draws on ILWS research expertise; and enhances the quality of teaching at CSU. The themes are:
Demographic change in rural Australia
Sustainable management of environmental assets
Vibrant rural and regional communities 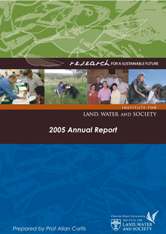 ILWS was established in 2005 with the aim of becoming an internationally recognised research group. Five substantial communities of scholars (Discipline Groups) were established to underpin the integrated research capacity in ILWS. Details on the highlights of this year are found in the report.