The Murrumbidgee River system is a major river system in the Murray-Darling Basin that is of high economic, social and ecological importance. It begins as a fast-flowing cobble system in a high rainfall area and ends as a large inland delta system in the semi-arid parts of NSW. The Murrumbidgee River channel delivers irrigation water to the Murrumbidgee and Coleambally Irrigation Areas as well as to towns along its length including Wagga Wagga and Hay. Although it has been highly regulated, it still has populations of endangered species such as trout Cod and Silver perch. The mid-Murrumbidgee and the Lowbidgee wetlands are listed as nationally significant wetlands with critical habitat for waterbird breeding and endangered frogs such as the Southern Bell frog. The system has also been targeted by the Australian Government for longer-term monitoring. 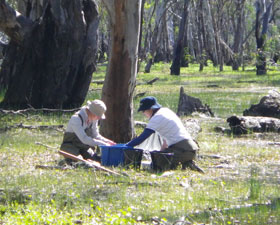 Leader of the project Dr Skye Wassens first started researching frogs in the semi-arid parts of NSW, including the Lowbidgee in 2000. In 2007 she helped develop an emergency watering strategy to save the endangered Southern Bell frog at risk of extinction due to altered flooding regimes in the Lowbidgee floodplains. Continued monitoring has proven this strategy was effective. Over the next four years the NSW Office of Environment and Heritage (OEH) funded further multi-disciplinary research identifying the relationships between the response of fish, waterbirds and frogs following environmental flows and natural flood events in the Lowbidgee. In 2011/12 CEWO provided funding to continue and expand monitoring in response to environmental watering to include more ecological indicators. 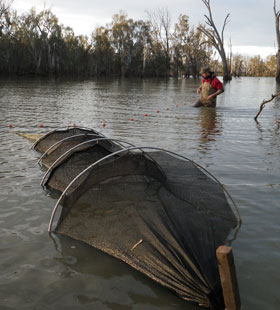 The reports from this work are Report 1 and Report 2

Further funding from the Commonwealth Environmental Water Office for 2012/13 has broadened the mid-Murrumbidgee project to include not only the monitoring of the response to environmental watering in the Lowbidgee wetlands but also in the Western Lakes, and the Murrumbidgee River itself from below Burrinjuck and Blowering Dams to its end - the first time that in-stream responses will be assessed.

zooplankton and water quality. The team will also be drawing on historical data on the Murrumbidgee from research done in the 1990s to make comparisons with some of the components of the system they are studying now.

The project is the first to consider both wetland and in-stream responses across an entire river system at a very large scale. By having the one large integrated project the researchers are able to look at a much 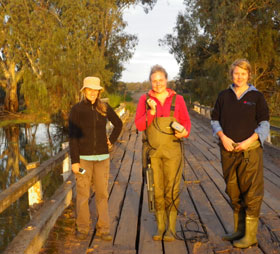 broader range of ecological responses across a range of spatial and temporal scales. As it builds on past projects they are also able to consider specific responses to individual flows within the context of longer-term datasets, with data collected right through the year rather than just in spring and summer. This is important because short term responses following environmental releases can often appear idiosyncratic especially in systems that have experienced high levels of modification and disturbance.

"By collecting data across all seasons, over repeat years and considering multiple levels of the food chain we are able to inform a more nuanced management approach and gain a deeper understanding of how these systems work." - Dr Skye Wassens