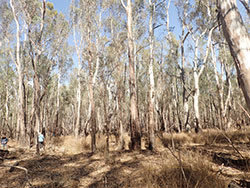 Given ongoing river regulation and the likelihood of future droughts resulting from climate change, the NSW Office of Environment and Heritage (OEH) Science Division has composed an experimental design and monitoring plan that seeks to determine whether reducing tree density leads to improved health and biodiversity. Reduced density is likely to mean more access to water, more mature hollow bearing trees which provide habitat and other valuable resources, and more wood debris for native Australian animals and plants. It's also expected to prevent further decline in the condition of the red gum canopy.

As a part of this plan Charles Sturt University undertook a full floristic survey of 198 plots throughout the national park to ascertain the condition of the vegetation prior to ecological thinning, in a collaborative project with NSW NPWS and UNSW. Under the direction of project leader Dr Peter Spooner, ecologists Ms Erika Cross, Dr Alison Matthews, Ms Shona Arber and Mr Gavin Thomas conducted the fieldwork from November 2015 to February 2016. Amphibromus fluitans, a grass species listed as Vulnerable on both the NSW and Commonwealth legislation, was recorded in a number of plots and believed to be an indication that environmental watering events may have improved habitat conditions.

As the conservation program progresses, the river red gums will be closely monitored to determine how ecological thinning is affecting the forest and the availability of key habitat features in high stem density stands. There is potential for CSU for further collaboration and assistance with on-going monitoring of the park following the thinning trial.

A report from the floristic survey has been submitted to NSW OEH.

The floristic survey has provided important base-line data for the ecological thinning trial which will advise and inform future management actions in the park.