The project has three research grants which contribute to the overall project. They are: 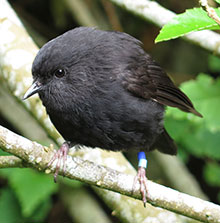 As part of this project, Dr Massaro and her PhD student Clare Lawrence investigate whether naïve New Zealand birds are able to adapt to novel exotic predators by studying parental activity in populations of Petroica robins from New Zealand and Tasmania that differ in their evolutionary and current exposure to nest predators. By finding nests and then video recording parental behaviours at the nest, they test whether birds are changing their behaviours due to the risk of predation.

They concluded that New Zealand robins were modifying their behaviour to reduce the risk of nest predation by exotic predators, and that these responses were lost when predation pressure is removed.

The researchers also used pre-existing data on black robins in the Chatham Islands, New Zealand, to test whether birds can learn to avoid introduced avian predators by their experiences.

An examination of nest site choices of re-nesting Chatham Island black robins following nest predation by invasive European starlings found that robins whose first nests were predated re-nested lower to the ground than those whose first nests were lost through other causes, which is consistent with a movement towards safer nest sites.

The cause of the first nest failure did not influence the distance between the first and second nesting attempts or the choice of nest substrate. The results suggest that some evolutionarily naïve species may be capable of assessing immediate predation risk through individual experience, and modifying their nest site decisions accordingly.

An understanding of how native species are responding behaviourally and physiologically to increased predation risk may be an important management tool for conserving threatened species that are vulnerable to introduced exotic predators.