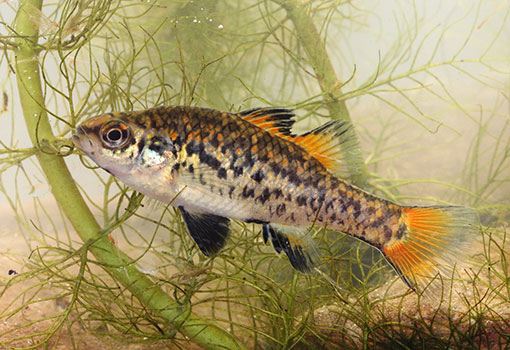 the Murray River. Sampling done by Luke Pearce (NSW DPI Fisheries) for his Masters project (completed in 2015) identified a population of Pygmy Perch in Coppabella Creek in the Upper Murray catchment near Tumbarumba/Jingelic, NSW.

However a massive flooding event in 2010 caused disturbances to the creek with Pygmy Perch populations suffering severe decline since then.

For this project researchers re-sampled for Pygmy Perch at the 10 original sites in Coppabella Creek, plus at another five sites in the Coppabella Basin at the end of 2017. As well, habitat mapping was undertaken along the creek to correlate the presence/absence of Pygmy Perch with habitat features. One of the aims of the habitat mapping was to identify refuge pools critical to the Southern Pygmy Perch during drought. The sampling done along Coppabella Creek found that the population of Pygmy Perch, while persisting, is restricted to upstream sites.

In February 2018 researchers sampled for both Pygmy Perch and Flat Headed Galaxias at 12 sites along the Murray from downstream Yarrawonga to Tintaldra. Flat headed Galaxias is suspected to be locally extinct in the NSW portion of the Murray with the last record of its presence at two sites in wetlands near Corowa in 2010.

The main findings were:

The final report presented a management plan for Southern Pigmy Perch recovery and conservation at Coppabella-Jingelic Creek, including pest species management and control, and the development of a physical barrier (dam) to deter carp and redfin from reaching and colonising the upper sites where Southern Pigmy Perch is present.

Luke Pearce has presented the report to Murray LLS and the management with a physical barrier has been well received. Funds are being sought to provide for the construction of the barrier.