What are the effects of the rodent eradication on the threatened Lord Howe currawong and its diet? (2018-2021) 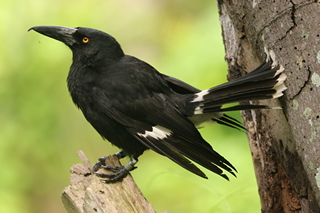 The majority of bird extinctions over the past 500 years have occurred on islands, mainly caused by the introduction of exotic predators. Lord Howe Island, 600km off the coast of NSW, is typical of the problems caused by the introduction of exotic mammals. The arrival of ship rats in 1918 caused a wave of extinctions among the native biota, and their presence continues to threaten the survival of birds, reptiles, invertebrates and plants.

In June 2019 the Science Division of the NSW Office of Environment and Heritage, and the Lord Howe Island Board, will implement a rodent eradication program – the most ambitious rodent eradication ever attempted on an inhabited island. While the eradication program (if successful) is expected to benefit many nesting birds on the island, those birds that forage on rodents, such as the threatened Lord Howe currawong, will have to find alternative food resources. There is concern that this dietary shift may lead to high predation on the also threatened white tern and increased dispersal of invasive plants such as the cherry guava.

Its aims are to:

By determining and quantifying both the benefits and any unwanted consequences of the rodent eradication program, the study will help inform any adaptive management strategies that may need to be put in place to mitigate any negative effects of the program. The information gained may assist with future implementations of rodent eradication programs elsewhere. The habitat suitability model to come out of this research as well as information about currawong nesting densities, survival rates and dietary needs will inform future management of the threatened species.