The Great Eastern Ranges is a nature corridor that runs from Melbourne in Victoria to the Atherton Tablelands in Queensland. It has significant biodiversity values that are threatened from fragmentation of landscapes. The goal of this project is to conduct social research and communications research that will underpin efforts to encourage landholders to participate in natural resource management (NRM), particularly those who have had low levels of engagement in the past.

The social research involved a survey of 2000 landholders in the Southern Highlands and Tablelands region of NSW. The survey sought to identify and characterise landholder segments in terms of the attitudes, values, sociodemographics, environmental behaviours, networks, media habits, geographic location and interest in four different NRM programs. The research identified the existence of five distinct segments which were: quality operators, traditional farmers, retiree lifestylers, professional lifestylers and blue collar blockies, all of which differed in their previous involvement in NRM and interest in future programs.

In addition, the research has involved a survey of all NRM agencies in Australia with respect to communication practices, and the development of eight different communications campaigns involving TV, Radio and Print Media. 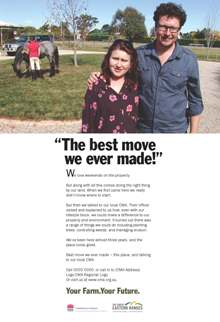 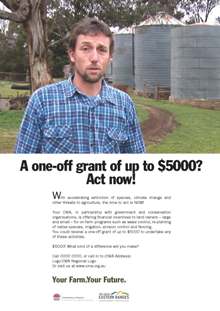 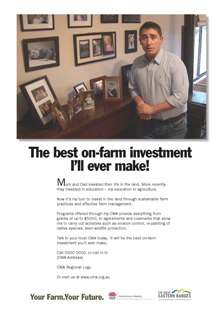 The goal of developing these eight campaigns is to identify which message/channel combinations are most effective at engaging landholders overall, and which are most effective at reaching those segments that have historically had low participation in NRM. Three focus groups were initially conducted with traditional farmers, absentee owners and lifestylers to investigate the efficacy of the first seven campaigns. Presentations were then made to the state government and CMA. Because the first seven campaigns were limited in their effectiveness at reaching lifestylers, an additional campaign was developed and tested using two focus groups in 2012.

The results for this research have been presented at two communications conference in Australia, and a presentation was made to Communications Officers from CMAs across NSW. A report on the survey results has been provided and presentations made to the NSW Environmental Trust and the Hawkesbury Nepean CMA. It is planned to produce at least three journal articles from this research once the project report has been completed.

The identification of the three different types of lifestyler segments has lead to changed communication practices at the Hawkesbury Nepean CMA. As one CMA communications officer recently commented: "Just to let you know we've been using the GERI research you did for lots of new comms projects and products as its has proved very useful...especially opening up that concept of blue-collar blockies — a whole target area we have vaguely known of, but never shaped a program or comms to communicate directly with them...".