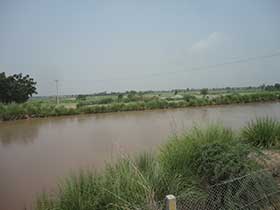 The Rechna Doab, which covers an area of 2.98 million ha

of irrigated land, is the interfluvial sedimentary basin of the Chenab and Ravi rivers, comprising part of the Indus River basin irrigation system in Pakistan.  Since the 1980s, pumping of groundwater for supplementary irrigation has reduced groundwater levels, and leakage from rivers and canals to groundwater has become the predominant form of surface water and groundwater interaction. Groundwater pumped from tubewells in the doab has played a vital role in increasing the intensity of agriculture in the Rechna Doab and contributed to improving food security.

The study found that the major components of the water balance are recharge from rainfall, river leakage, canal leakage and irrigation recharge which accounts for 93 percent of inputs to the system.

Four scenarios were undertaken from 2014 to 2030 to assess aquifer status and availability of groundwater for irrigation and to meet planning requirements for PID. A comparison of the simulated scenarios showed that if groundwater pumping was reduced by 10 percent and surface water availability was increased by 10 percent then an estimated total water savings of 900 GL/yr is possible.

The study found that improved controls on pumping will achieve greater water savings. Thus PID will need to focus effort on significantly enhancing the level of groundwater management.

Based on the calibration period from 2008-2013, the researchers recommended that:

Since 2008 PID has implemented a systematic monitoring program of water levels and water quality parameters from several hundred piezometers and tubewells.

The researchers recommended that, to make a difference in management of groundwater:

The researchers identified that, when surface water supplies are unequally distributed resulting in less water for tailenders, farmers tend to increase reliance on groundwater despite the fact that the water quality may not be suitable. There was an urgent need for improved access to surface water supplies for mid and tailenders, in combination with advice to farmers on use of groundwater for irrigation and 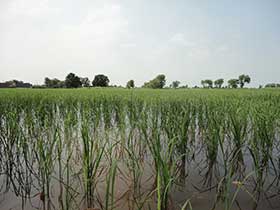 improved monitoring and governance of groundwater.

The study has improved understanding of the sustainability of groundwater usage in Rechna Doab and provided the Punjab Irrigation Department with tools to improve the management of surface and groundwater in the doab. It has supported the Punjab Irrigation Department in the implementation of more equitable, economically efficient and sustainable canal and groundwater management options for Rechna Doab. This project has led to a second, larger project in Pakistan, Improving groundwater management to enhance agriculture and farming livelihoods in Pakistan. (2016-2020) Finlayson, M., Punthakey, J., Allan, C., Mitchell, M. ACIAR & CSU ($100,000), Total value of the project $2,15M  Project details