Predicting the delivery of ecosystem services in agricultural landscapes, (2014-2017)

The ecological sustainability of Australian agriculture relies on services (for example, pollination) provided by ecosystems. Service provision is threatened by environmental change, but there is no established approach for predicting the impact of change on services.

This project undertook the most comprehensive experimental examination of ecosystem-service delivery ever conducted in Australia, testing the predictive capacity of an approach that links environmental change with variation in service provision through species' traits.

1. Activities of birds and insects in apple orchards

For this activity, the researchers examined the contribution of birds and insects to the biological control of pests, the contribution of insects to crop pollination, as well as the damage these organisms can cause to the crop. Exclusion field experiments were conducted over two growing seasons from September to March in 2014/2015, and 2015/2016 in six apple orchards with two orchards each in Shepparton in Northern Victoria; Batlow in the South West Slopes region, NSW, and Harcourt in the Central Highlands, Victoria. The orchards were graded from the lowest intensity management (the most organic) through to the highest intensity management (greater use of pesticides, clearing of understorey.) 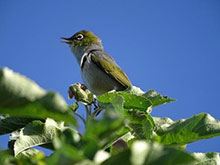 Findings so far are:

In grazing areas, the researchers investigated the contribution of scavenging birds and insects to the breakdown of animal carcasses, how this might provide a service to farmers and the ecosystem, and how landscape context influences the provision of this service. Seventy-two platforms, about 2m off the ground, were erected in autumn in 2014 and 2015 on a property at Docker Plains in North East Victoria with rabbit carcasses (wired down) placed on the platforms and also on the ground for eight days. The platforms were placed in different landscape contexts –open paddocks, near remnant vegetation along the river, next to isolated paddock trees and within a National Park. Bird activity was monitored using motion sensing cameras and insect abundance (maggots) on the rabbit carcasses was measured.

3. Contribution of raptors to pest bird control in vineyards

The researchers examined whether the provision of perches in vineyards for raptors altered pest bird behaviour to the point where it reduces the damage being done to grapes. Twenty five perches were erected in vineyards in North East Victoria in 2015/16 and monitored with motion sensor cameras. Raptor and pest bird activity was measured, and grape damage was assessed at varying distances from perches and other landscape features.

The expected major outcomes include greater capacity for agriculturalists to maximise ecosystem benefits and increase economic returns, and improved biodiversity conservation through recognition of its contribution to agriculture.