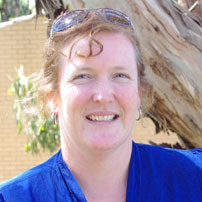 Jenny, who is based at the Wagga Campus, commenced her PhD in March 2014 with principal supervisor A/Prof Jonathon Howard (ILWS), and Dr Ndungi wa Mungai and Dr Karen Bell, all from CSU's School of Humanities and Social Sciences.

After training as a nurse and motherhood, she returned to tertiary studies in 2009 to do her Bachelor of Social Work at CSU followed by her Honours project which studied spirituality as a means to coping and resilience among the Lhotsampa people from Bhutan, specifically a cohort of refugees settled in Albury, NSW. At the same time she was on placement with the Multicultural Council in Wagga working with Burmese and Afghan refugees. Since then she has done further work with the Council as a case worker in Griffith, working predominantly with Afghan refugees.

Jenny is the Secretary of the North Wagga Residents Association and as such has been very involved in the rebuilding of the community after the floods in North Wagga in March 2012 and has been amazed at the community's resilience and determination to continue living in one of Wagga's oldest suburbs; hence the focus of her PhD.