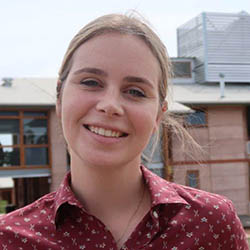 Leia Rogers, who commenced her PhD studies in February 2020, completed her Bachelor of Animal Science (Honours) with CSU’s School of Animal and Veterinary Science, in Wagga Wagga in 2019.

While she originally intended to use animal science as a pathway to veterinary science, she found that what she really liked was “lab work, conservation and wildlife” which has headed her down “the conservation, welfare and behaviour kind of path.”

Leia’s Honour’s project, which was supervised by Associate Professor Raf Freire and Dr Keller Kopf, was on judgement bias in Murray cod.  The project was done as a joint project with another student, Ellie Sales, who was looking at personality types - bold and shy- in Murray cod.

While the judgement bias paradigm has been used for animal welfare studies to assess their mental state, it had never been done with fish before.

What Leia found out was that, with the two personality types, it was the “bold” fish that could be trained to the paradigm. It was these fish that were used for the judgement bias test.  For those experiments, a second Murray cod was placed in a tank for 24 hours to see, by opening the third, “ambiguous door” if the first Murray cod would go into a negative affective state i.e. stressed and unhappy.

“We found the Murray cod that had a second Murray cod in their tank for 24 hours were less likely to enter those ‘ambiguous’ doors,” says Leia. “They had a pessimistic outlook, expecting a predator or something, whereas the ones that were our control, they were optimistic, they were entering the ambiguous door more, expecting to get their food reward.”

While Leia is still exploring options for exactly what her PhD study will focus on, it will be looking at fish behaviour and ecology of native freshwater fish.

She will be based at the Wagga campus for the first year of her studies, but expects to move to Albury in 2021 to take advantage of the new aquatic laboratory facilities on campus.