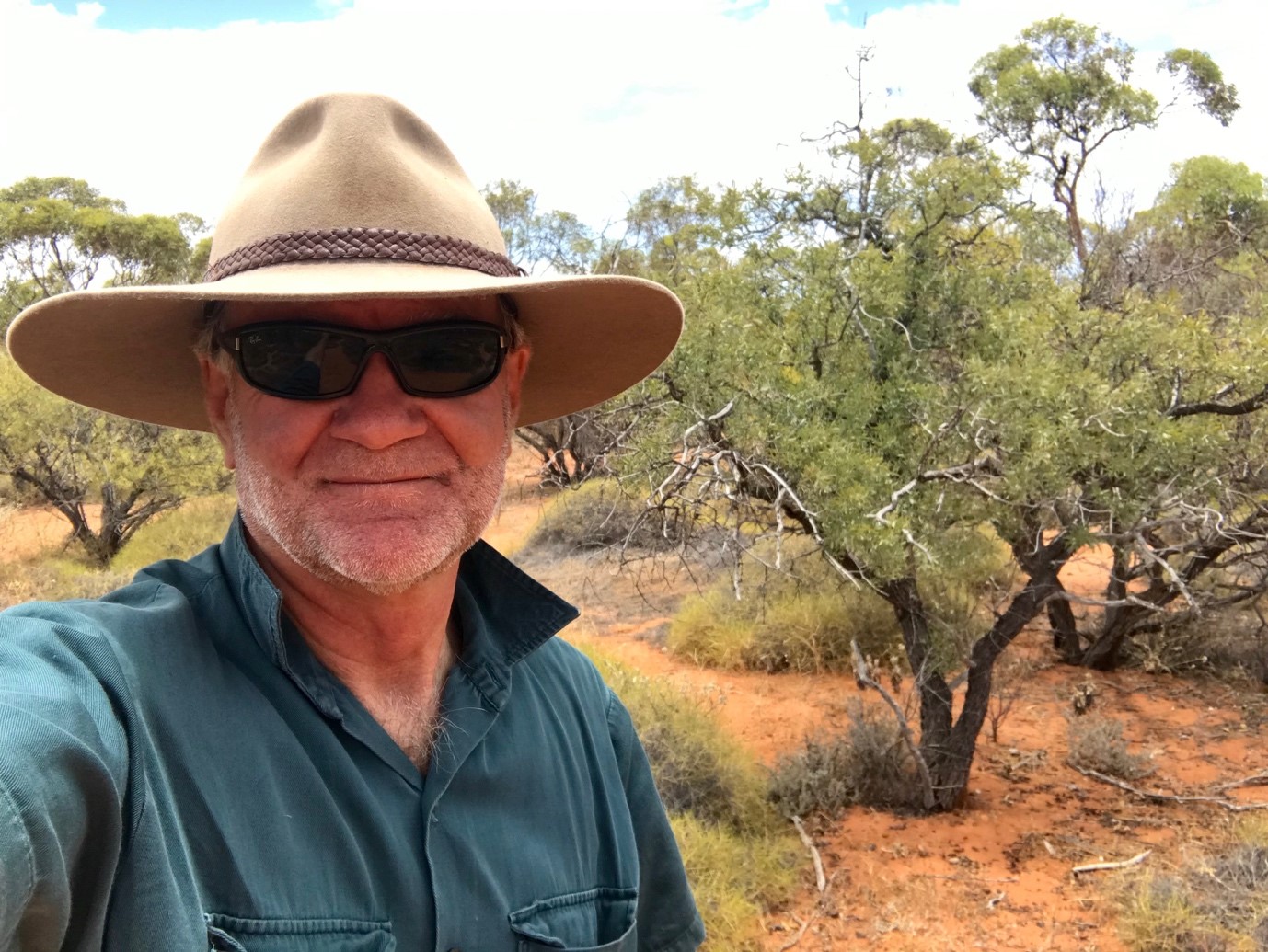 The ecology of Santalaceae species (Sandalwood, Quandong, Leafless Ballart) in the semi-arid rangelands of mid-west Australia.

Richard, who is based in Geraldton, Western Australia, commenced his CSU postgraduate studies as an ILWS scholarship recipient in February 2019.  He did his undergraduate studies at the University of Western Australia before embarking on a rich and varied working career - including for many years with WWF (the conservation organisation) - in Australia, Cambodia and Switzerland. Although he joined WWF as a field ecologist, working in the temperate woodlands of the Southwest Australia Botanical Province, he also worked on landscape-scale native vegetation protection, management, and restoration in Australia and overseas; and sustainable development.

This project, in the semi-arid rangelands of WA, draws upon many of these elements - investigating the ecology of three hemiparasitic Santalaceae species (Sandalwood, Quandong and Leafless Ballart); the ecosystem processes associated with them; and the ecological impacts of key threatening processes such as overexploitation, grazing, fire, and climate change.

The aims of the project include an enhanced understanding of the ecology of the plants, the ecosystem processes associated with them, and the benefits to be gained by land managers in maintaining and enhancing their survival in the landscape.

The study will also incorporate ‘two-way science’ - working with Traditional Owners in the study area to incorporate traditional ecological knowledge concerning such aspects as cultural significance, seed dispersal and plant propagation, and past and future customary sustainable use of the three species.

Richard is a very avid science communicator, especially via his own Twitter account (@RichardMcLellan) and a secondary account that promotes and shares the work of hundreds of other Australian ecologists (@OutbackEco).

Richard presented a talk entitled "Worth more alive than Dead? The unknown implications of 175 years of sandalwood overexploitation on 13 October at the Subiaco Community Centre.

Richard gave a presentation on Santalaceae Science research for the Bush Heritage webinar “Resilience and Hope in Uncertain Times”,  April 23, 2020.

Eucalyptus of the Year

Richard mounted a campaign to have the spectacular Western Australian wheatbelt species llyarrie, Eucalyptus erythrocorys voted Eucalypt of the Year on National Eucalypt Day, March 2, 2020 it worked! Eucalypt Australia congratulated Richard for single-handedly leading the strongest campaign for the title that it had seen yet.

Success at  the ESA 2019 Annual Conference

Richard was awarded the Runner-up Student Prize for ‘Outstanding Poster Presentation’ at the Ecological Society of Australia 2019 Annual Conference held in Launceston, Tasmania, November 24-30.  Richard’s poster, and his conference presentation, both entitled “Sandalwood (Santalum spicatum) is on course for extinction in the semi-arid rangelands of Western Australia. Why is it still being overexploited?” attracted considerable interest among the delegates.

The plight of Western Australian Sandalwood (Santalum spicatum) was the subject of a presentation given by Richard at the Western Australian Threatened Species Forum, held in Geraldton, Western Australia, in early September. Richard’s presentation focussed on the complex array of key threats impacting Santalaceae species in the western rangelands of WA – particularly the cumulative impact of past overexploitation, intense grazing pressure, lack of recruitment, loss of natural dispersers, and climate change.

Richard was invited to be the guest speaker, speaking about the ‘Santalaceae Science’ project, at the Gunduwa Regional Conservation Association AGM meeting, August 22, 2019 at Charles Darwin Reserve, east of Perenjori, in Western Australia.

Richard presented the collaborative ‘Santalaceae Science’ project at the Hamelin Science Fair in early August 2019 at Hamelin Station Reserve, near Shark Bay, in Western Australia. Hamelin Reserve is owned and managed by Bush Heritage Australia – one of the partners in the broader ‘Santalaceae Science’ project led by Professor David Watson. Richard’s presentation was principally an introduction to the project and its researchers.

Richard presented his ‘Santalaceae Science’ project to Aboriginal women at three ‘Yamaji Women on Country’ workshops held in midwest Australia – at Geraldton, Kalbarri, and Denham, Shark Bay in August, 2019. The workshops, all of which engaged Aboriginal communities within Richard's study area, were aimed at encouraging increased participation by Aboriginal women in environmental research and monitoring projects and activities within the Yamaji region.

Richard gave a public presentation entitled: “Worth more alive than dead? The unknown implications of 175 years of sandalwood overexploitation” as part of the Kings Park Seminar Series in Perth, Western Australia on November 21, 2019.  He was invited to deliver the same presentation at the Ecosystem Restoration and Intervention Ecology (ERIE) Research Centre at the University of Western Australia on November 22.

Richard is the foundation chair of the Board of Forest Conservation Fund, an international Swiss-based initiative which was launched as a global virtual event on June 20 to celebrate World Rainforest Day. The fund aims to decentralise conservation by empowering local communities and private sector actors to protect forest under their control.