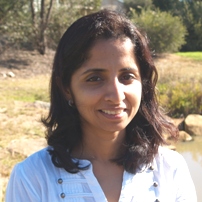 Originally from the small town of Puttaparthi in southern India, Deepa has worked in IT (financial systems) in Baltimore and Idaho in the United States. In 2001 she and her husband, who works in business, migrated to Australia. Deepa continued working in IT in Melbourne but around 2004 started taking on management roles and, during a break between projects, became a member of her company's Corporate Social Responsibility Committee. In 2008 Deepa enrolled at Melbourne University to do her Masters of Environment.

During her Masters, Deepa, as a recipient of the Prime Minister's Australia Asia Endeavor Award in 2011, did a large research project on the conjunctive use of surface water and ground water in arid canal irrigated areas with a case study in India. The award also allowed her to work as an intern at the International Water Management Institute in Hyderabad, India until February 2012.

Deepa's research is part of a National Centre for Groundwater Research and Training (NCGRT) project "Integrating Socioeconomics, Policy and Decision Support" Program and in particular the social science component which is led by Prof Allan Curtis.