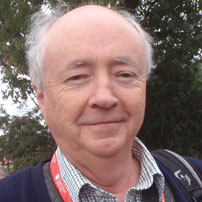 Associate Professor Ian Gray's current research focuses on rail transport and its relationship to regional development and social issues. His latest publication, with Dr Merrilyn Crichton and published in the Journal of Social Exclusion, examines the social impacts of the cessation of train services.

Ian has continued to push for the revival of regional rail. To that end, he has helped instigate three successful seminars on the subject in regional NSW. The first, held in Wagga in 2007, the second seminar, held in Blayney, May 10, 2013 and the third event was held on September 17, 2014 at CSU's Albury-Wodonga campus. He delivered a presentation at SEGRA 2015 on "Rail Freight for Regional Development".

Video produced from Getting on the Rails Symposium, held at the Albury-Wodonga CSU campus in September 2014.

He has previously conducted many research projects including one on regional transport for the Local Government and Shires Associations of New South Wales and a national project on regionalism funded by the Australian Research Council.

Prof Gray is a member of the Lachlan Regional Transport Committee.

McLean, D. and Gray, I. (2012) 'History for Policy: What is the value of history for the in-principle assessment of government intervention in rural Australia?'Rural Society, 21 (3): 190-197

What are the factors affecting the ability of agriculture to attract and retain young people? Gray, I. DPI, Victoria, $14,000 (2011) Project details