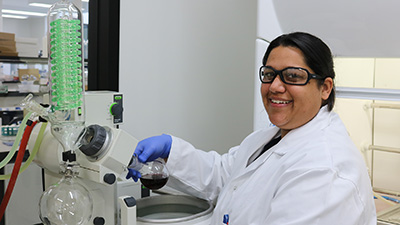 Research by Charles Sturt University PhD candidate Ms Esther Callcott has identified the potential for using Australian-grown coloured rice as a functional food to combat some of the health risk factors associated with obesity and lifestyle diseases.

Her research profiled the polyphenol content and antioxidant activity in Australian grown rice varieties. She also tested the anti-inflammatory and antioxidant properties in cell cultures and in clinical trials involving healthy weight and obese people.

Why is this research important?

This research has the potential to benefit human health and to develop new opportunities for the Australian rice industry.

“Obesity is significantly correlated to the development of other lifestyle diseases such as type II diabetes, cardiovascular disease and cancer due to the obese having higher levels of inflammation and free radical damage,” said Ms Callcott.

“The findings from this study are important for consumers as this research demonstrates that consuming only one cup of purple/black or red rice will increase their antioxidant activity and reduce inflammation and free radical damage.

“As a result, incorporating the consumption of coloured rice into their diets may have the potential to reduce consumer’s risk of developing lifestyle diseases. Overall, improving the health of the Australian consumer and reducing strain on the public health system.

“Increasing consumer demand for coloured rice may pave the way for greater commercial production, and value adding in the Australian rice industry with the potential to boost economic returns.

“Most of the coloured cultivars prefer warmer climates, so this research may facilitate the Australian rice industry’s expansion into northern Australia, providing new farming system opportunities in those regions.”

What further knowledge is needed?

“In particular, long-term human clinical trials need to be conducted to investigate the impact coloured rice may have on weight loss, antioxidant and anti-inflammatory activity and gut health as well as the effect on the pathogenesis of other lifestyle diseases,” Ms Callcott said.

Ms Callcott has submitted her thesis.