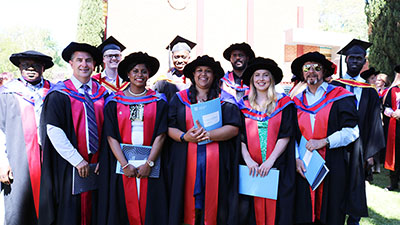 Welcome to our first newsletter of 2020. It’s been an eventful few months, however, the most exciting activity in recent weeks was seeing eight of our FGC students graduating in December. It has also been wonderful to see our students entering the workforce. Both Drew Portman and Shiwangni Rao have positions with Agriculture Victoria in Horsham; Michelle Toutounji has commenced a technical role with Arnott’s in Sydney and Esther Callcott is working at Charles Sturt University’s School of Animal and Veterinary Sciences.

We are also excited to welcome Borkwei Nignpense back to the centre. Borkwei completed Honours research with us last year and will commence his PhD with us soon. Our visiting students continue to make important contributions to the Centre and we were delighted to have Sofia Speranza spend some time with us. Sofia joined us from Italy, via AEGIC in North Ryde where she also completed a project on grain quality.

We look forward to updating you throughout 2020 to keep you informed of FGC activities.

Photo caption: a photo of the FGC graduates 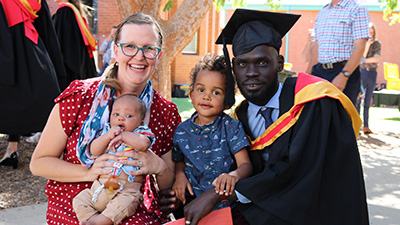 The achievements of four PhD and four Honours research graduates have been recognised in a Charles Sturt University graduation ceremony on Monday 16 December 2019.

FGC Director Professor Chris Blanchard said it is an important milestone for the graduates and the Centre. 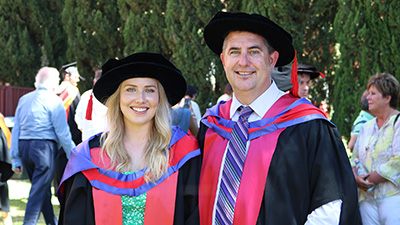 “The research conducted by some of these graduates has increased our knowledge about the potential therapeutic benefits of coloured grains for diseases like cancer and diabetes,” Professor Blanchard said. 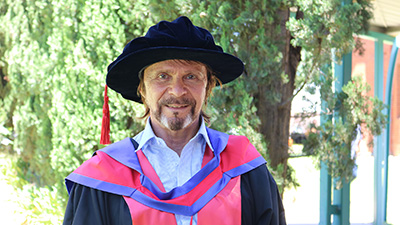 “It paves the way for more research and for the development of functional foods that could benefit consumers and in turn deliver new marketing opportunities for the Australian grains industry.

“Importantly the research has also looked at what happens in the paddock and how that impacts on some of these health properties. 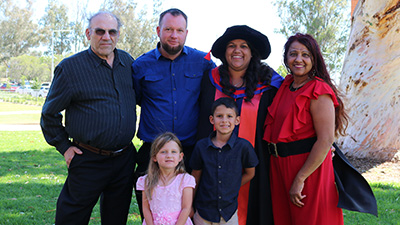 Dr Esther Callcott’s research has identified the potential for using Australian-grown coloured rice as a functional food to combat some of the health risk factors associated with obesity and lifestyle diseases. Read more 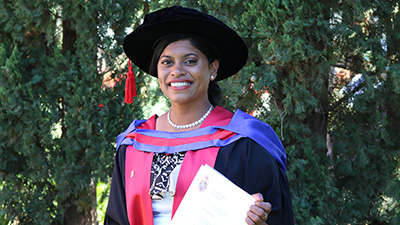 Dr Rachael Wood’s research has found it’s possible for rice growers to reduce water use without compromising the whole grain yield, an important indicator of grain quality. She also found increasing the zinc (Zn) content of the rice through fertilisation will not affect grain quality but may improve the Zn level delivered to consumers, which could deliver benefits for human health. Read more 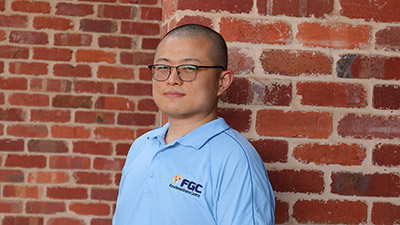 PhD student, Ximing (Simon) Xu from Shenyang Agricultural University in China is spending a year at the Functional Grains Centre.

“I think the Functional Grains Centre is a good concept in crop science research,” he said. “Especially the high grain quality research.” 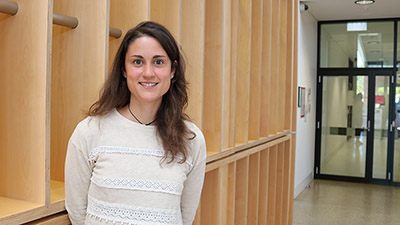 Italian student, Sofia Speranza spent a few months with the Functional Grains Centre as part of her research into how the baking process influences the antioxidant activity of bran when added to bread.

She says she enjoyed being involved with the FGC.

“I got to learn about all the amazing research projects that are being conducted here and the people behind them.” 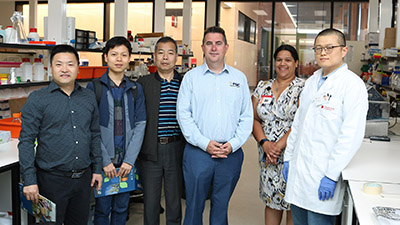 It was also great to be able to meet with a delegation from the College of Food Science and Technology, Nanjing Agricultural University in China during December and showcase our research. 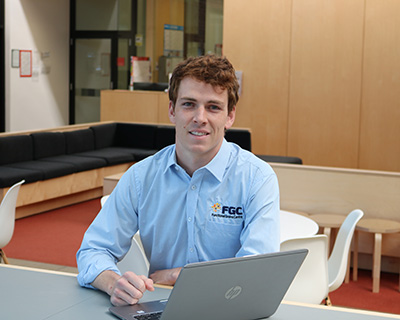 The awards recognise future young leaders aged between 20 and 29 who are making a significant contribution to their local community.

Mr Clarke is from Finley in the NSW Riverina, has a strong interest in agriculture and is a keen footballer.

His PhD research at the FGC is developing a model to allow for rice to be graded on the basis of quality at the point of delivery.

Mr Clarke is one of eight finalists in the award.

Read more about his FGC research. 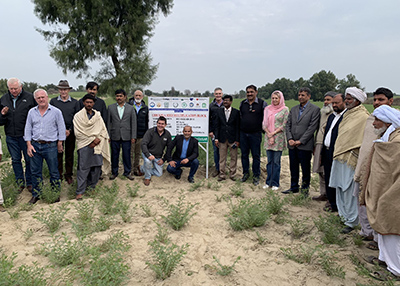 What better way to recognise World Pulses Day than spending it in Pakistan as part of a tour showcasing FGC research to enhance production of this important crop.

The project, funded by the Australian Centre for International Agricultural Research (ACIAR) is working with Pakistani farmers to improve the way lentil, chickpea and groundnut crops are grown.

Mr Earle farms at Mungindi on the NSW and Queensland border and says it was valuable to gain a better understanding of pulse production in Pakistan. 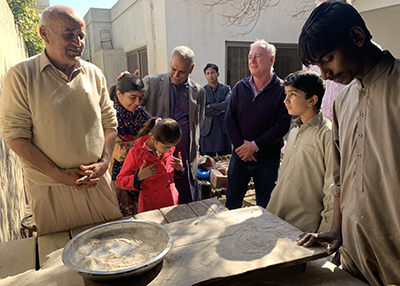 “I was surprised to see that most of the chickpea crop was grown in a much drier region than I was expecting and on poor soil types,” he said.

“It was interesting to learn that Pakistani growers view the crop as a high risk and are reluctant to spend too much money to improve yields.

“The difference between the prices Pakistani farmers receive for their pulses and the retail price is much greater than I had expected, if the farmers were able to store and market during the year rather than accepting harvest pricing they would be much better off.

“We certainly have some similar agronomic challenges growing chickpeas in Australia.

“For example we also view the crop as being less reliable than the traditional cereals but with improved management we have been able to make the crop more reliable and profitable. 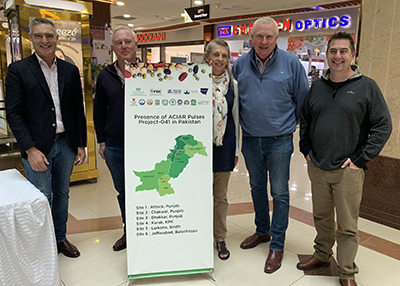 “The tour also gave me a better understanding of the value of a foreign aid program in terms of maintaining the relationship with Pakistan, which has aspirations of being self-sufficient in pulse production but has major issues with the variable climate.”

“Despite the language barrier, our Australian Farmers were able to quickly learn from Pakistani farmers about their production systems and discovered that issues facing farmers in Pakistan are similar to those faced by Australian farmers.

“The Australian farmers were able to make several useful recommendations on future experiments the project could explore to assist in improving the profitability of pulse production in Pakistan.”

Mr Earle said a highlight of the trip was a farmer field day near Islamabad.

“We looked at chickpea crops and trials and were able to interact with growers and discuss the rotations. 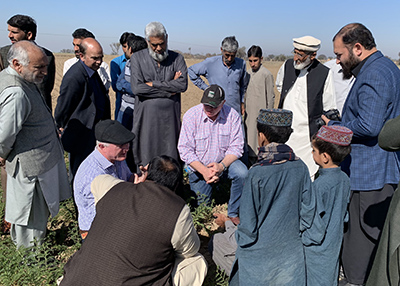 “Although there are very big cultural differences we can share the way that farmers and researchers interact to solve problems for growers.

“Including making sure that farmers are the focus when setting research priorities, rather than just presenting information to farmers,” Mr Earle said. 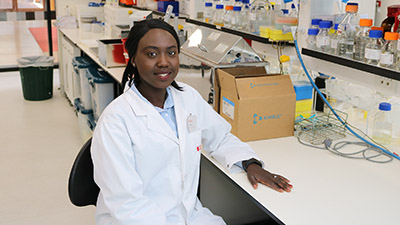 In Australia sorghum is something we think more about feeding to animals than eating ourselves but the potential health benefits from compounds in this grain is the focus of new PhD research at the Functional Grains Centre.

I am currently a PhD candidate in the School of Biomedical Sciences with the Functional Grains Centre at Charles Sturt University.

I have a background in pharmaceuticals at CSL-Seqirus where I was involved in producing the Influenza vaccine in 2016. In the same year, I was awarded first class honours, from Swinburne University in affiliation with the Peter MacCallum Cancer Centre where my thesis was titled ‘Establishing Patient Specific Parameters for Radiotherapy of Non-small Cell Lung Cancer’. I also graduated with a Bachelor of Science (Biomedical Science) in 2015 from Swinburne University with Distinction.

What is your PhD studying?

Sorghum has been found to reduce long-term complications such as liver disease and several forms of cancer. My project aims to determine the impact of sorghum-derived polyphenols and protein hydrolysates on pathways of cancer progression and development. I will be examining the protective role that sorghum extracts impart on chronic inflammation, resisting apoptosis, invasion and metastasis, chronic cell cycle replication and sustained angiogenesis. The bioavailability of sorghum varieties will also be explored in order to determine physiologically attainable levels in the body for favourable health benefits.

Why is that important for the grains industry?

In Australia, sorghum is exclusively used for livestock feed. The crop has the ability to withstand harsh climates such as drought and heat. By studying this grain and understanding its health benefits there is the potential to increase human consumption of sorghum. This might support the development of alternative markets and provide more opportunity for sorghum production. 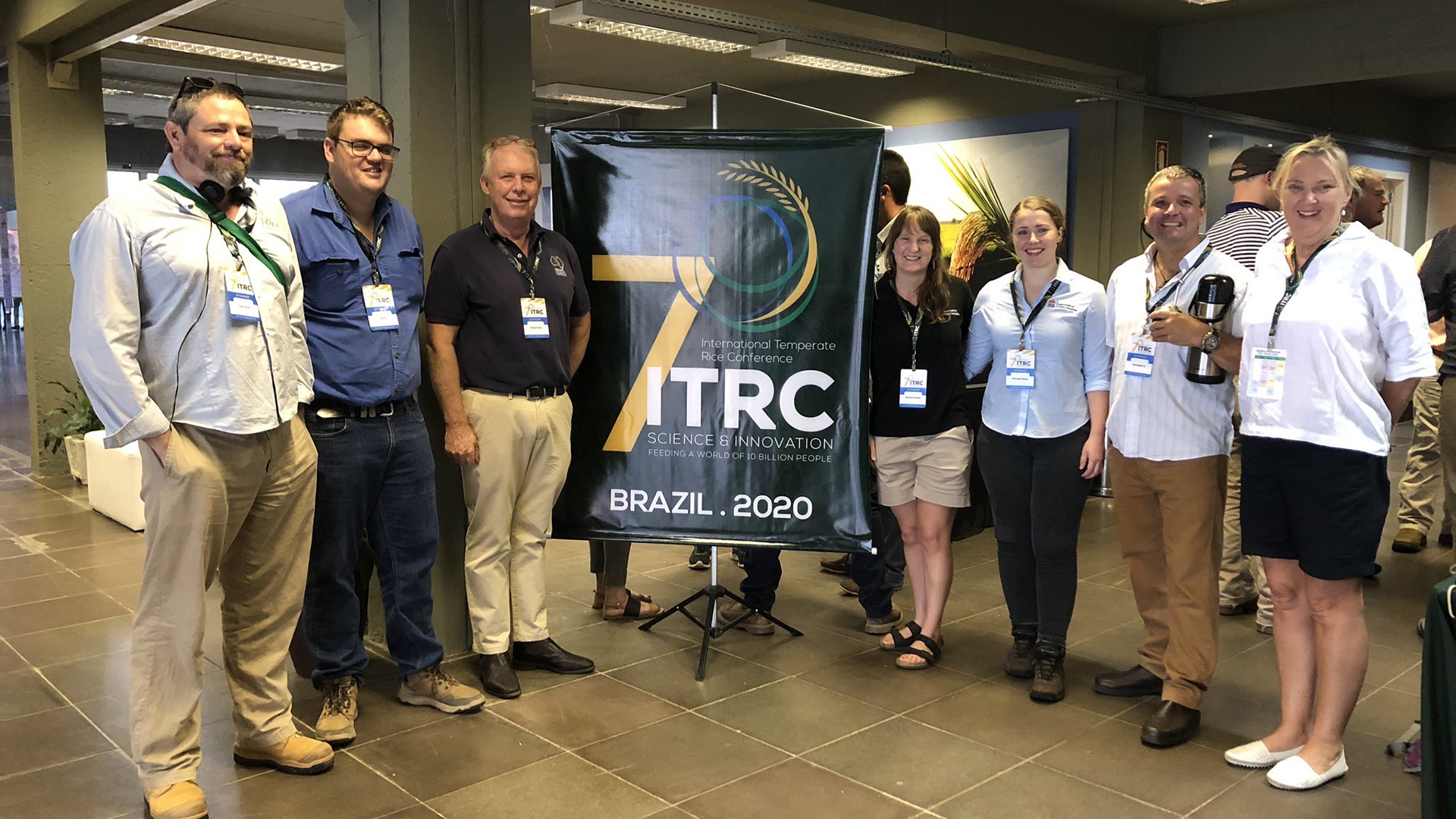 FGC PhD graduate Rachael Wood has presented her research into at the International Temperate Rice Conference in Brazil.

During her trip to South America she also visited Rio Grande Do Sul’s Rice Research Station in Porto Alegre in Brazil and Instituto Nacional de Investigación Agropecuaria in Uruguay.

Oils ain't oils: How many time can you fry your chips with Canola oil?

Charles Sturt University research comparing Canola oil processed using different techniques has found significant differences in frying life - that is the number of times the oil can be reused. 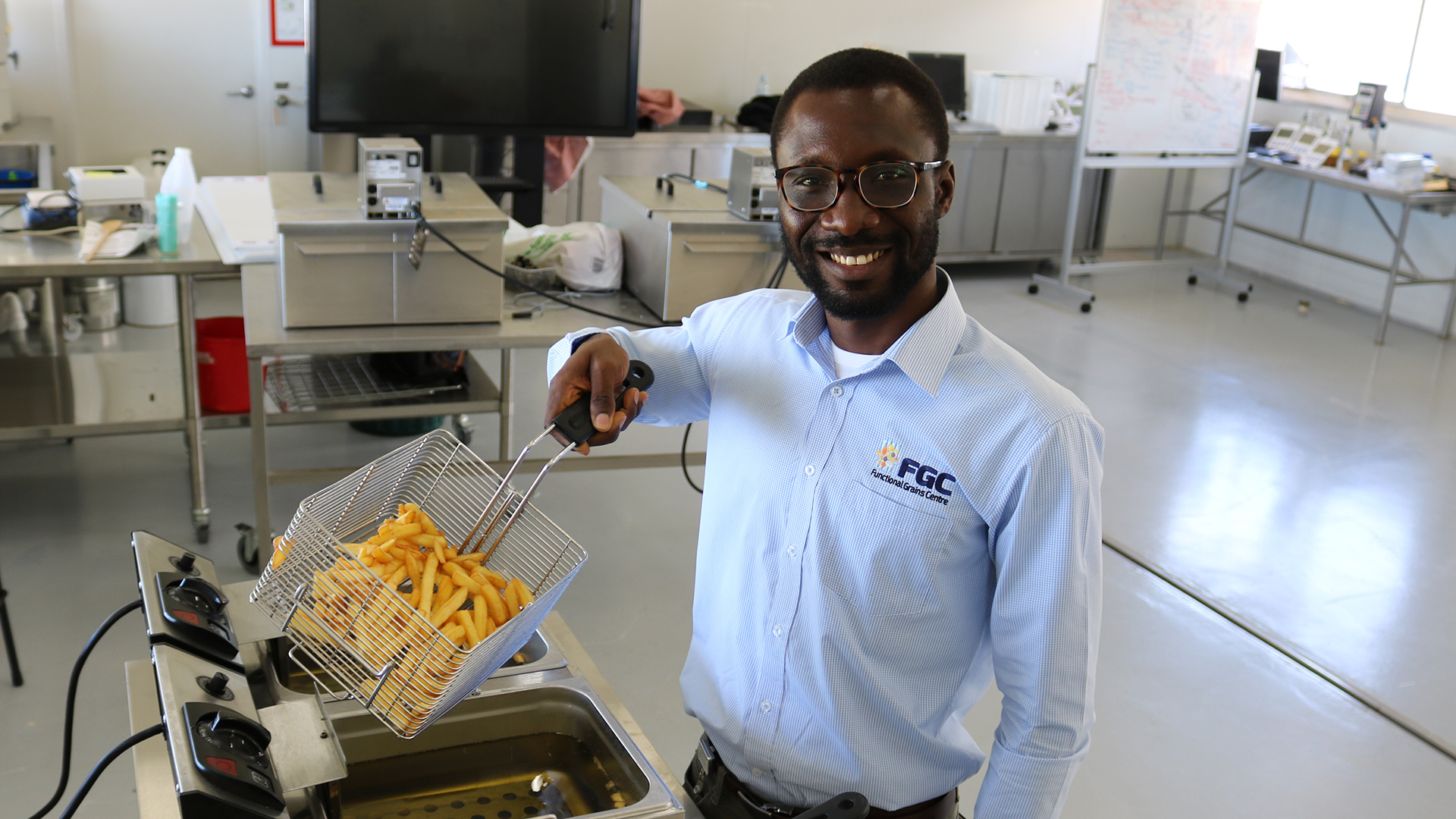 The project at the Australian Research Council (ARC) Industrial Transformation Training Centre for Functional Grains examined the quality of canola oil samples used to fry potato chips for 36 to 48 cycles.

“The number of times you use Canola oil for frying impacts on the taste and health properties,” Dr Adjonu said.

“Our research has found the extraction and processing method can significantly impact the frying life of Canola oil, with differences of up to 30 per cent.

“It’s not as simple as saying one extraction or processing method is better than another in terms of frying life though, as there were differences between samples extracted using similar techniques. 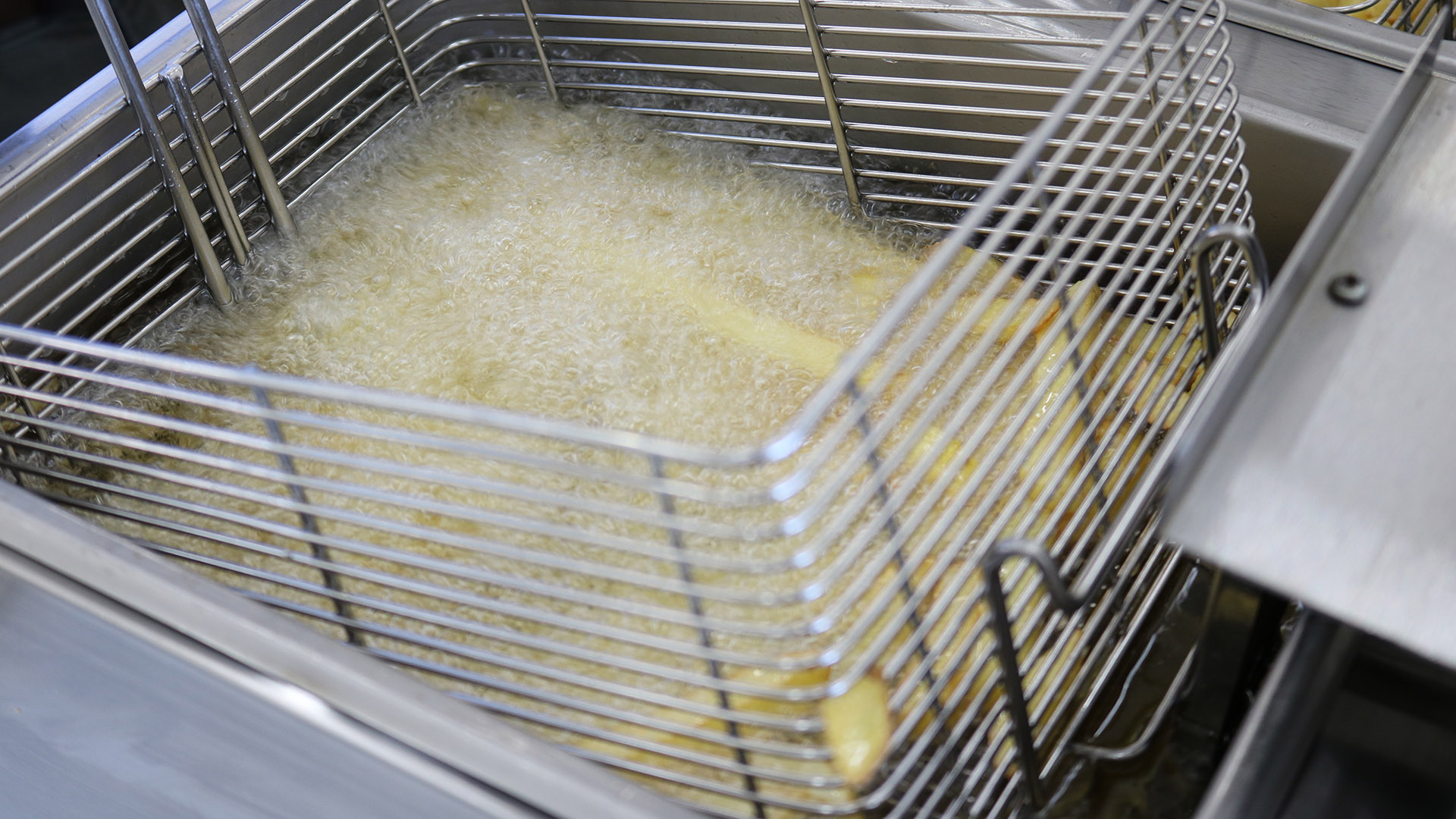 “More research is needed to pinpoint how extraction and processing influences frying life, so processors can use this information to improve their product.”

“The more times you can use the oil without compromising the quality increases its value for money,” Dr Adjonu said.

“Increasing the frying life is one way that Canola oil processors can add value to their product.

“Much of Australia’s Canola is currently exported for biodiesel production, and increasing the value of oil crushed locally for human consumption is one way we can ‘future proof’ our industry against volatility in the world markets.”

The research has also been published in the journal Foods.

Funded by the Australian Government through the ARC’s Industrial Transformation Training Centres scheme, the FGC is administered by Charles Sturt and is an initiative of the Graham Centre for Agricultural Innovation.