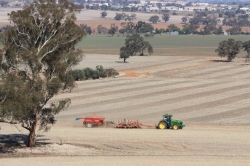 Since 1892, agricultural research and education have been conducted at the site now occupied by NSW Department of Primary Industries (DPI) and Charles Sturt University. Initially known as the Wagga Wagga Experimental Farm in 1893, the Farm was later developed in to the Wagga Agricultural College (1948) and the Agricultural Research Institute (1954). Early researchers included William Farrer, Nathan Cobb and Albert Pugsley. In 1976, the education and research functions of the Agricultural College became part of the Riverina College of Advanced Education, which later became the Riverina-Murray Institute of Higher Education and finally, Charles Sturt University in 1989. In 1996, the NSW Agriculture Research Institute became a Centre of Excellence for Southern Farming Systems and Viticulture and today is known as the Wagga Wagga Agricultural Institute.

The Graham Centre is named after Edgar ("Eddie") Hugh Graham. He was the longest serving NSW Minister for Agriculture and held the regional seat of Wagga Wagga from 1941 until his sudden death in office in 1957. He is still respected for his pioneering role in developing rural policies and education. He opened the Department of Agriculture Wheat Research Institute in 1950 and the Agricultural Research Institute in 1954

You can view further information about the history of Charles Sturt University and the Wagga Wagga Agricultural Institute.

Sponsoring with the Graham Centre allows you to expand your networks..

For information about sponsoring the Graham Centre please contact grahamcentre@csu.edu.au